Auroras Dancing in the Night

Glowing green ripples form arcs that constantly transform their shape into new glowing diaphanous forms: there is nothing static about aurora. It is always moving, always changing, and like snowflakes, each display is different from the last. Sometimes, there is a faint touch of red layered above the green.

There are bright spots within the arcs that come and go, and transform into upward directed rays topped by feathery red structures. Sometimes there will be six or more rays, sometimes none at all.

Where does the auroral light come from? 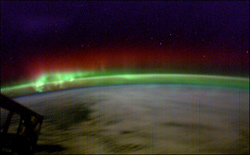 Most of the light is emitted by oxygen atoms excited from bombardment by charged solar particles. Charged particles consisting of atomic fragments released by the Sun stream through space and run into Earth's magnetic field.

When a charged particle moves through a magnetic field, a force perpendicular to the motion is created and that force diverts the particle into a spiral path until it collides with atoms in the upper atmosphere. In a sense, auroras are the neon lights of the Earth's poles.

The upper atmospheric collisions excite the atoms (oxygen and nitrogen) into emitting light, in much the same way that electrons pumped inside of a glass tube filled with neon gas create a neon light. The green light emitted from excited oxygen is centered around a wavelength of 558 nanometers, while the rarer red light is emitted around wavelengths in the 630 nanometer region. (See what it looks like) 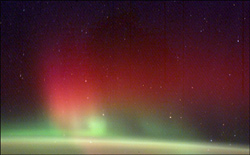 An aurora profile -- Green aurora extends upward from the Earth's airglow layer in the photograph above. When red aurora is present, it usually extends above the green aurora.

Because auroras follow Earth's magnetic field, we observed them near the Earth's poles. Further, we saw auroras more frequently on the Canadian side of the Northern Hemisphere than the Siberian side due to the north magnetic pole lying in the proximity of Hudson Bay.

Auroral activity seems to be at its peak 180 degrees from the sun. When our orbit coincided with local midnight at high latitudes, we looked forward to turning down the lights and peering out a north-facing window.

From the ISS vantage point at approximately 400 km above the Earth's surface, we observe aurora profiles. The edge-on view in the upper atmosphere allows aurora height scales to be estimated. Using the atmosphere as a ruler where its edge is taken to be about 50 kilometers in altitude, the green emissions extend from the ever present thin-shell of airglow at 2 atmospheric thicknesses (about 100 km altitude) to perhaps 6 atmospheric thicknesses (300 km).

The red emissions are at higher altitudes. They lie on top of the green and extend beyond that layer by about 4 atmospheric thicknesses, thus placing them in the 300 to 500 km range. 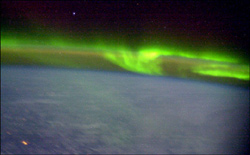 Swirls of bright green aurora above the airglow. The bright light in the lower left is a small city in Canada

One time the space station flew through one of these curtains while over northern Canada near local midnight. Our orbital altitude was 388 km. Glowing green lines, some curvy like a doodle on a scrap of paper and some spotted like a connect-the-dot drawing were seen while looking through a nadir-viewing window. We were most definitely above the aurora looking down onto the structure.

A glance through the north-facing window was a sight to behold. We were in a dimly glowing fog of red. It was like we had been shrunk down to some miniature dimension and inserted into the tube of a neon sign. And it was just on the other side of the windowpane ... we wanted to reach out and touch! Afterwards, I had to clean a nose print off of the window. 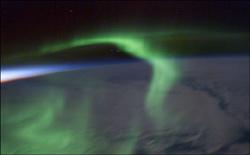 The ISS-6 crew enjoyed this green aurora dancing over the night side of the Earth just after sunset. The reds and blues of sunset light up the air layer to the west.

For a few days, our viewing geometry was such that we enjoyed a celestial treat: we could see at the same time the green glow of auroras and the iridescent layers of orange and blue of the Earth's horizon at sunset. It was as if Iris and her sister of the night were having a brief conversation.

During one orbit, I observed a green aurora in the blackness above the sunlit atmosphere. But a red aurora glowed above the terminator (the fuzzy line on Earth that separates day from night). The red emissions seemed to follow the path of the terminator as it moved westward until it was no longer in sight. I was star-struck! Auroras, out of all other natural phenomena, are the most deserving of goddess stature.

About the Images
Astronaut photographs comprising the movies and were taken with a Kodak DCS760 digital camera equipped with both a 28 and 58 mm lens, and provided by the Earth Observations Laboratory, Johnson Space Center. The International Space Station Program supports the laboratory to help astronauts take pictures of Earth that will be of the greatest value to scientists and the public, and to make those images freely available on the Internet.

Additional images taken by astronauts and cosmonauts can be viewed at the NASA/JSC Gateway to Astronaut Photography of Earth. This article is a modified excerpt from Don Pettit's Space Chronicles.