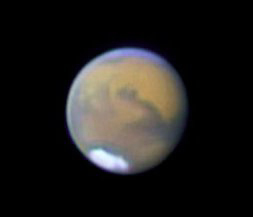 Left: Amateur astronomer Thomas Williamson of New Mexico took this picture of Mars on August 1st. He used an 8-inch telescope and a digital web camera.

Mars has gotten so big in recent weeks that even a backyard telescope will show details on the planet's surface: dust clouds, volcanic terrains, impact basins. Best of all is the polar ice cap. The southern hemisphere of Mars is tipped toward Earth and its bright southern cap, which reflects more sunlight than any other part of the planet, is remarkably easy to see.

Don't wait too long to look, though, because the ice is melting. Like Earth, Mars has seasons that cause its polar caps to wax and wane. Lately, for instance, amateur astronomers using 8-inch and larger telescopes have been watching a frosty mountain range emerge from the ice.

You can watch too. Just look south between midnight and dawn on any clear night this month. Mars is that eye-catching red star, outshining everything around it. It's getting brighter every night as Earth and Mars converge for a close encounter on August 27th. Pay close attention to the shrinking cap of ice as it develops rifts, dark spots, and a ragged border.

For the full story, visit Science@NASA.

Written by Dr. Tony Phillips
Science@NASA
› Back To Top