Baby Star is Way Ahead of its Time
Something weird is happening inside a nearby stellar nursery. An embryonic star is giving off a healthy glow…in X-rays. Like a precocious child, the developing star (protostar) is far too young for that kind of behavior.

New stars are born when a cloud of dust and gas in interstellar space collapses under its own gravity, or so we thought. The strange behavior of this protostar reveals that something else might help gravity turn a bunch of gas and dust into a star.

Scientists have pierced through a dusty stellar nursery to capture the earliest and most detailed view of a collapsing gas cloud turning into a star, analogous to a baby's first ultrasound. 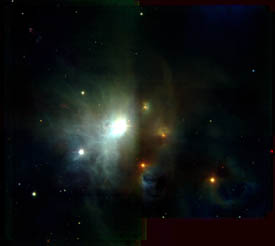 Image above: This stunning image comes from the R Corona Australis star-forming region, about 500 light years from Earth. This image was created with the University of Hawaii 88-inch telescope in the "near" infrared waveband, which is slightly lower in energy than what is visible to our eyes. Many protostars (reddish) and young stars (bright white) are seen here. [credit: UH88 / Nedachi et al.] Click here for print-resolution image (1 meg)

The observation, made primarily with the European Space Agency's XMM-Newton observatory, suggests that some unrealized, energetic process -- likely related to magnetic fields -- is superheating the surface of the cloud core, nudging the cloud ever closer to becoming a star.

The observation marks the first clear detection of X-rays from a nascent yet frigid precursor to a star, called a Class 0 protostar, far earlier in a star's evolution than most experts in this field thought possible. X-rays are produced in space by processes that release a lot of energy and heat. The surprise detection of X-rays from such a cold object reveals that matter is falling toward the protostar core 10 times faster than expected from gravity alone.

"We are seeing star formation at its embryonic stage," said Dr. Kenji Hamaguchi, a NASA-funded researcher at NASA's Goddard Space Flight Center in Greenbelt, Md., lead author on a report in The Astrophysical Journal. "Previous observations have captured the shape of such gas clouds but have never been able to peer inside. The detection of X-rays this early indicates that gravity alone is not the only force shaping young stars." 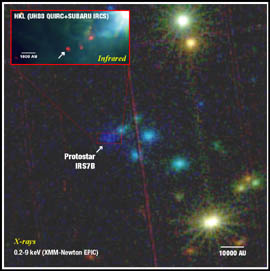 Image above: This is a slightly wider view of the R Corona Australis star-forming region, this time seen in X-ray energies captured by ESA's XMM-Newton observatory. The six blue sources are protostars, mostly corresponding to the reddish dots seen in figure 1. (The brightest sources are stars outside the view of figure 1.) The Class 0 protostar that Kenji Hamaguchi's team observed in X rays is labeled IRS7B. Although not obviously visible in figure 1, this protostar would be just left of the bright central source in that image. Zooming in on the Class 0 protostar, we see it once more -- this time seen in an infrared waveband lower in energy than that in figure 1. [credit: ESA/XMM/Subaru/UH88] Click here for print-resolution image (3.25 meg)

Hamaguchi's team discovered X-rays from a Class 0 protostar in the R Corona Australis star-forming region, about 500 light years from Earth.

Class 0 is the youngest class of protostellar object, about 10,000 to 100,000 years into the assimilation process. The cloud temperature is about 400 degrees below zero Fahrenheit (minus 240 Celsius). After a few million years, nuclear fusion ignites at the center of the collapsing protostellar cloud, and a new star is formed.

The team speculates that magnetic fields in the spinning protostar core accelerate infalling matter to high speeds, producing high temperatures and X-rays in the process. These X- rays can penetrate the dusty region to reveal the core.

"This is no gentle freefall of gas," said Dr. Michael Corcoran of NASA Goddard, a co-author on the report. "The X-ray emission shows that forces appear to be accelerating matter to high speeds, heating regions of this cold gas cloud to 100 million degrees Fahrenheit. The X-ray emission from the core gives us a window to probe the hidden processes by which cold gas clouds collapse to stars." 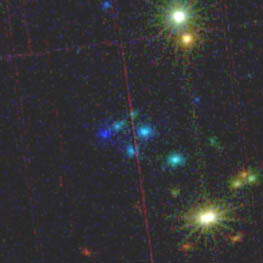 Image above: A star is born... well, in another million years. The blue dots are protstars seen in X-ray light. This is the same as image 2, only without the labels. [credit: ESA/XMM/ Hamaguchi et al.] Click here for print-resolution image (1.75 meg)

Hamaguchi likened the generation of X-rays in the Class 0 protostar to what happens during solar flares on our Sun. The solar surface has lots of magnetic loops, which sometimes get tangled and release large amounts of energy. This energy can accelerate electrically-charged particles (electrons and ionized atoms) to velocities of 7 million miles an hour. The particles smash against the solar surface and create X-rays. Similarly tangled magnetic fields might be responsible for X-rays observed by Hamaguchi and his collaborators.

The detection of magnetic fields from an extremely young Class 0 protostar provides a crucial link in understanding the star formation process, because magnetic field loops are believed to play a critical role in moderating the cloud collapse. Only electrically-charged particles, called ions, respond to magnetic fields. The scientists are not sure where the magnetic fields or ions come from. However, X-rays will ionize atoms, creating more ions to be accelerated through magnetic activity and create more X-rays.

The team used XMM-Newton for its powerful light-collecting capability, necessary for this type of observation where so few X-rays penetrate the dusty region, and the exquisite resolving power of Chandra to pinpoint the X-ray source position. The team used the infrared Subaru telescope to determine the protostar's age.

"The age is based on a well-established chart of spectra, or characteristics of the infrared light, as the protostar evolves over the course of a million years," said Ko Nedachi, a doctoral student at the University of Tokyo who led the Subaru observation.

U. of Hawaii 88-inch telescope