Most Distant Galaxy Cluster Shows Universe 'Grew Up Fast'
Sometimes it seems like new housing developments go up overnight, and surprised astronomers are saying the same thing about entire galaxies.

A galaxy is a "stellar metropolis," an immense congregation of stars, gas, and dust bound together by their mutual gravity. It would take light 100,000 years to cross our galaxy, the Milky Way, which holds hundreds of billions of stars. Astronomers have debated how long it takes such massive structures to come together, and how long it takes galaxies themselves to gather into even larger groups called galaxy clusters.

Scientists have discovered the most distant massive structure in the Universe, a fully formed galaxy cluster containing hundreds, if not thousands, of galaxies. The discovery is evidence that the Universe's elegant hierarchal structure of stars, galaxies and clusters formed quickly after the big bang, the primordial expansion of space believed to have created all matter and energy in the Universe. This is far earlier than most astronomers thought possible just a few years ago. 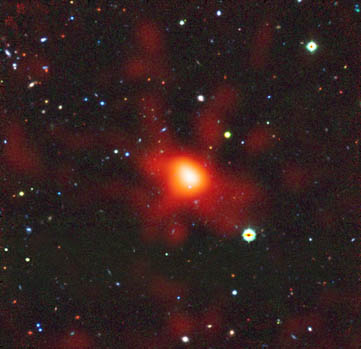 Images above and below: The distant, massive galaxy cluster as it existed when the Universe was less than five billion years old, or one third its present age. This is a composite image of an XMM-Newton X-ray image of diffuse, hot gas in the cluster (central orange blob in the image above) and ESO-VLT optical/near-infrared images of galaxies (red, green, and blue specks in both images. In the image below, old galaxies in the cluster appear as a small group of red dots in the center where the X-rays appear in the above image.) Image Credit: ESO/ESA/Mullis et al. Click here for a 6 meg print-resolution version of the XMM-Newton image above 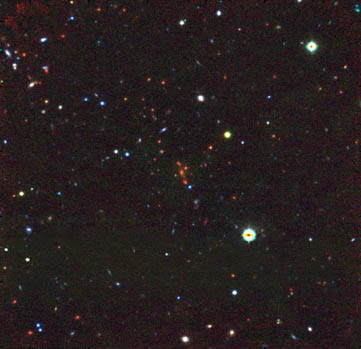 The discovery was made with the European Space Agency's XMM-Newton Observatory and the European Southern Observatory's Very Large Telescope (ESO VLT) in Chile. Dr. Christopher Mullis of the University of Michigan, whose research is supported through NASA XMM-Newton grants, presents this finding at a scientific meeting Tuesday evening in Kona, Hawaii, entitled "The Future of Cosmology with Clusters of Galaxies."

"We are quite surprised to see that exquisite structure like this could exist at such early epochs," said Mullis, who is also lead author on a report about this finding in an upcoming issue of The Astrophysical Journal. "We see an entire network of stars and galaxies in place at just a few billion years after the big bang, like a kingdom popping up overnight on Earth."

Observing remote objects is of great interest to astronomers because such objects act like time machines. Let's go back to the fact that light takes about 100,000 years to cross our galaxy. If an alien at one end of our galaxy observes a star at the other end, it is seeing the star as it existed 100,000 years ago, because that's how long it took for the star's light to cross the galaxy and reach the alien observer. Similarly, if we observe another galaxy so remote that it took the galaxy's light a billion years to reach us, then we are seeing a younger version of that galaxy as it appeared a billion years ago. 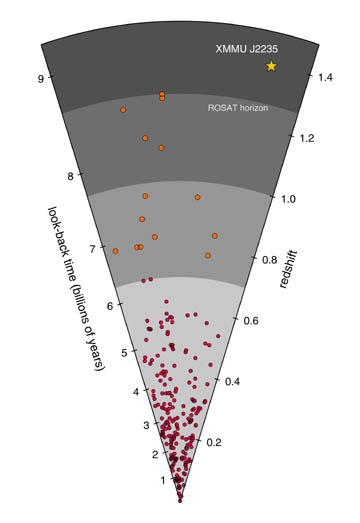 Image above: Schematic diagram of the distribution of known galaxy clusters in space. As Earth-bound observers look out from the bottom point toward the top of the cone, they view an increasingly distant and early Universe. Distance (redshift) is marked on the right axis and the corresponding cosmic look-back time is indicated on the left axis. The newly-discovered cluster at redshift 1.4 (labeled "XMMU J2235") illuminates a remote regime which is well beyond the horizon of previous studies (labeled "ROSAT horizon"). Image Credit: C.Mullis et al. Click here for a print-resolution version of the above image.

"We have underestimated how quickly the early Universe matured into its present-day incarnation," said Dr. Piero Rosati at ESO headquarters in Garching, Germany, a co-author on the report. "The Universe grew up fast."

The scientists said this discovery might be the tip of the iceberg. Their results are based on a first peek at archived XMM-Newton data from the past four years. Other clusters undoubtedly lie hidden in the data archive waiting to be discovered, they said.

Galaxy clusters contain hundreds to thousands of galaxies gravitationally bound to each other. Our Milky Way galaxy resides in a relatively low-density region of the Universe, part of a "local group" of galaxies but apparently not bound to the nearby Virgo cluster. Scientists study the distribution and growth rate of galaxy clusters to understand the overall structure and evolution of the Universe.

Most of the ordinary matter in galaxy clusters takes the form of hot, tenuous gas in between galaxies. This gas is invisible to optical telescopes but can be detected with large, orbiting X-ray observatories, such as XMM-Newton. Mullis said that a 12-hour XMM-Newton observation of a nearby galaxy revealed tantalizing evidence of a galaxy cluster far in the background. Knowing where to look, his team used the powerful ESO VLT in the Atacama Desert in Chile to find an optical counterpart. 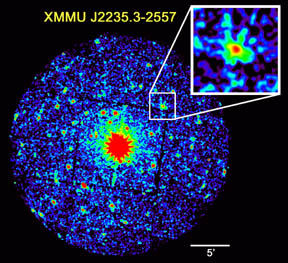 Image above: XMM-Newton observation of the nearby galaxy NGC7314 (bright object at center) from which the distant cluster (white box) was serendipitously identified. Image Credit: ESA Click here for a print-resolution version of the image above.

Sure enough, the team found dozens of galaxies associated with this X-ray emission. The VLT data established the distance to the cluster, at a redshift of 1.4, corresponding to about 9 billion light years away. The galaxies were reddish, elliptical types, an indication that they were already several billion years old and filled with older red stars. The cluster itself was largely spherical, a sign that it was well formed.

Proto-clusters, which are clusters in the making, have been seen over 10 billion light years away. The new finding is the best evidence yet of when these wild proto-clusters reached maturity. The relative ease of discovery, based on archived data, implies that the team could build a large sample size of exceedingly distant clusters. This would allow scientists to directly test competing theories of structure formation and evolution. The team is currently pursuing detailed follow-up observations from both ground and space-based observatories.

"This discovery encourages us to search for additional distant clusters using this same efficient technique," said team member Dr. Hans Bohringer of Max Planck Institute for Extraterrestrial Physics (MPE) in Garching. "It also shows great promise for experiments under construction, such as the Atacama Pathfinder Experiment. Such diligent searching will ultimately place strong constraints on fundamental parameters of the Universe."

Other team members include Rene Fassbender and Dr. Peter Schuecker (MPE) and Drs. Axel Schwope and Georg Lamer of the Astrophysical Institute of Potsdam.

The Big Bang and the evolution of the Universe: Introduction to Cosmology