Ringside Seat to the Universe's First Split Second
You don't get much closer to the big bang than this.

Scientists peering back to the oldest light in the universe have evidence to support the concept of inflation, which poses that the universe expanded many trillion times its size faster than a snap of the fingers at the outset of the big bang. 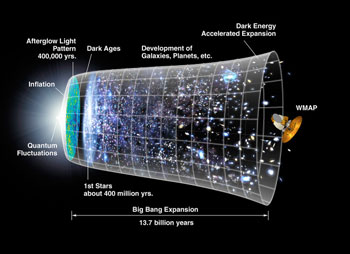 Image to right: Time Line of the Universe -- The expansion of the universe over most of its history has been relatively gradual. The notion that a rapid period "inflation" preceded the Big Bang expansion was first put forth 25 years ago. The new WMAP observations favor specific inflation scenarios over other long held ideas. Click image to enlarge. Credit: NASA

We're talking about when the universe was less than a trillionth of a trillionth of a second old. In that crucial split second, changes occurred that allowed for the creation of stars and galaxies hundreds of millions of years later.

The new finding was made with NASA's Wilkinson Microwave Anisotropy Probe (WMAP) and is based on three years of continuous observations of the cosmic microwave background, the afterglow light from the first moments of the universe.

It's admittedly mind-boggling. Inflation poses that the universe expanded far faster than the speed of light and grew from a subatomic size to a golf-ball size almost instantaneously. This concept, however, was a mere product of calculations done with pencil and paper around 1980. The idea stands on much firmer ground today.

"Inflation was an amazing concept when it was first proposed 25 years ago, and now we can support it with real observations," said WMAP team member Dr. Gary Hinshaw of NASA Goddard Space Flight Center in Greenbelt, Md., a lead author on one of the scientific papers submitted for publication.

How do we gaze back to the infant universe? The cosmic microwave background is a fossilized record of what occurred way back when. Embedded in this light are subtle patterns that point to very specific conditions about the early universe.

Previous observations have focused on the temperature patterns of this light, which have provided an accurate age of the universe and insights into its geometry and composition. The temperature differences, varying by about a millionth of a degree, point to density differences---a little more matter here, a little less matter there. Over the course of millions of years, gravity exploited the density differences to create the structure of the universe---stars and galaxies separated by vast voids.

The new WMAP observations give not only a more detailed temperature map, but also the first full-sky map of the polarization of the microwave background.

This major breakthrough enables scientists to obtain much deeper insight into what happened within the first trillionth of a second, when cosmic inflation perhaps occurred. The polarization signal is at least 100 times fainter than the temperature signal.

The WMAP team is announcing two major results: evidence for cosmic inflation, and confirmation of when stars first turned on. Both results depended on a combination of temperature and polarization data.

WMAP finds that the first stars---the forebears of all subsequent generations of stars and of life itself---were fully formed remarkably early, only about 400 million years after inflation. This is called the era of reionization, the point when the light from the first stars ionized hydrogen atoms, liberating electrons from the protons.

Polarization is affected by the environment through which the light passes, such as the polarized glare of sunlight produced when it reflects off of a shiny object. Scientists are hunting for two kinds of polarization signals in the microwave background. One, called the E-mode, points to the era of reionization. This is the polarization caused by the microwave background scattering off of the ionized hydrogen. The other is called B-mode, which points directly to inflation.

For example, scientists now have an upper limit on the energy of inflation. Also, WMAP data support basic predictions of inflation about the size and strength of spacetime fluctuations and how they get weaker on smaller length scales.

"It blows my mind that we can now distinguish between different versions of what happened within the first trillionth of a second of the universe," said Dr. Charles Bennett of the Johns Hopkins University in Baltimore, WMAP principal investigator.

And it's only going to get better as WMAP continues to soak up light. The polarization detection will grow stronger. "The longer WMAP observes, the more it reveals about how our universe grew from microscopic quantum fluctuations to the vast expanses of stars and galaxies we see today," Bennett said.

The European Space Agency plans to launch a mission called Planck by 2008 that will study microwave background polarization. A proposed NASA Beyond Einstein inflation probe would search for B-mode signals, the calling card of the big bang.