Ten Inventions Created for James Webb Space Telescope Approved
Scientists and engineers have been working for years to develop ten technologies for NASA's James Webb Space Telescope, like big mirrors that will actually move around in space and computer software that will make it happen, or the materials that make up a giant sunshield as big as a tennis court. These and other inventions have now passed approvals at NASA. The approvals mean that they can go from the laboratory to being manufactured to fly on the telescope. 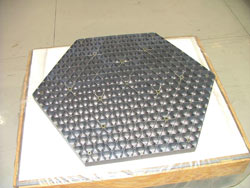 Image right: This is one mirror segment. Each of the Webb telescope's 18 hexagonal shaped mirror segments is 1.3 meters (4.26 feet) in diameter, and weighs approximately 20 kilograms (46 pounds). The 18 mirror segments will form a single large mirror with a total area of 25 square-meters (almost 30 square yards) when they come together. + Click for high res image Credit: NASA

When all of these technologies are put together on the telescope, scientists will use them to study the first generation of stars and galaxies that formed about 400 million years after the Big Bang. This is no small feat. Looking at starlight is like looking back in time, because it takes the light from those stars years to get to Earth. Light moves at 186,000 miles per second so imagine how far you have to travel to get from a star 50 light-years away from Earth.

Scientists now think that all of these inventions will be able to survive the flight into space and work correctly.

Among the new technologies are: near and mid-infrared detectors, sunshield materials, microshutters and wavefront sensing and control. All inventions, with the exception of wavefront sensing and control are "cryogenic," which means icy cold. It's important for these pieces to be kept cold because the telescope will be reading heat and light from stars, and heat from instruments would get in the way of a good reading. 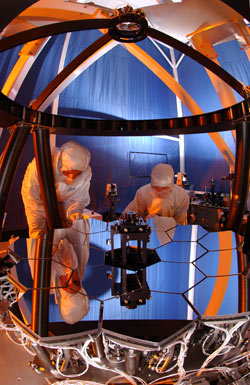 Image left : The Wavefront sensing and control system processes cosmic images through mathematical algorithms to calculate the mirror adjustments required to bring the image into focus. When the individual mirrors are properly aligned, the Webb telescope will be able to obtain extraordinarily sharp images and detect the faint glimmer of a distant galaxy. Ball Aerospace engineered a scaled telescope testbed, shown here, so that wavefront sensing and control can be developed and tested. + Click for high res image Credit: NASA

Many of the technologies have never been seen before on any satellite or space telescope. The Microshutters and the Wavefront Sensing and Control are just two examples.

Microshutters are tiny doorways the width of a few hairs that will allow scientists to remotely and systematically block out unwanted light and view the most distant stars and galaxies humans have ever seen. The James Webb Space Telescope will be the first to use this technology.

Image right: This is an array of microshutters, about the size of a postage stamp. Each shutter measures 100 by 200 microns, or about the width of three to six human hairs. These tiny shutters are arranged in a waffle-like grid containing over 62,000 shutters. The telescope will contain four of these waffle-looking grids. + Click for high res image Credit: NASA/Chris Gunn

Wavefront Sensing and Control refers to a set of algorithms (complex mathematical equations) and software programs that will help determine the best position for each of the telescope's mirrors, and will adjust their positions if necessary. The technology will enable the mirrors to function as one very sensitive telescope to look deep into space and time.

NASA reviewed the inventions now, which is early in the development of the telescope, because scientists wanted to see if the new technologies were ready to be included in the mission. They also wanted to make sure that the inventions would enable the space telescope to do its expected job. "This early test was our attempt to address one common problem that NASA missions encounter that leads to increased costs," said Eric Smith, James Webb Space Telescope program scientist at NASA Headquarters, Washington. "That problem is late maturation of technology in a program’s life-cycle." 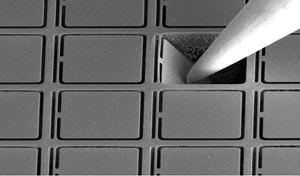 Image above: Microshutters are tiny cells that measure 100 by 200 microns, or about the width of three to six human hairs. This is a closeup view of the microshutters. Credit: NASA

The telescope is planned for launch in 2013.