NASA's 'Webb Slinger' Heads to Washington, D.C.
This May, there will be more than one "web slinger" coming to town. In addition to the superhero, who will make his third movie appearance, NASA has its own "Webb" slinger – the James Webb Space Telescope. The Webb space telescope will be much larger than the Hubble Space Telescope, its predecessor. A life-sized model of the "Webb" telescope is coming to the National Mall, Washington. 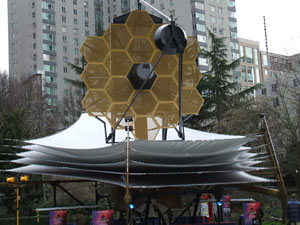 The James Webb telescope will be able to look back to the beginning of time. It will find the first galaxies and will peer through dusty clouds to see stars forming planetary systems, connecting the Milky Way to our own Solar System. Launch is scheduled for 2013.

"There's more than just one similarity between the web-slinging superhero and the James Webb telescope," said John Decker, Deputy Associate Director for the James Webb Space Telescope Project at NASA's Goddard Space Flight Center, Greenbelt, Md. "The sunshield on the spacecraft is actually shaped like a giant spider web, when you look at it from the top."

During the second week in May, visitors to the Nation's Capitol will be able to see the life-sized model of NASA's latest "superhero," and get a picture taken next to it. The model will be assembled on May 9, and will be on display through May 12 in front of the Smithsonian's National Air and Space Museum on the National Mall, Washington. 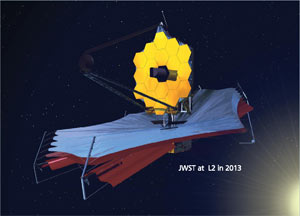 Image left: Looking down at the James Webb Space Telescope, the sunshield, which is stretched out underneath the mirrors (yellow) looks like a spider web. Click image to enlarge. Credit: NASA

NASA and Northrop Grumman, the contractor who built the model, will set up information booths next to the model, where visitors can get information and educational materials, and speak with people who are involved in the project to build the real James Webb Space Telescope.

The full-scale telescope model was built to give the viewing public a better understanding of the size, scale and complexity of this breakthrough satellite. Specifically designed for an environment subject to gravity and weather, the model is constructed mainly of aluminum and steel, weighs 12,000 lbs., and is approximately 80 feet long, 40 feet wide and 40 feet tall. A specially manufactured material imported from France called "Ferrari Precontraint" allows the sunshield to 'breathe.' The model requires 2 trucks for shipping, and assembly takes a crew of 12 approximately four days.

Image/animation above: This animation shows the JWST Sunshield unfolding like a spiderweb, as it will appear after its launch into space. Click image to view animation. Credit: Animation courtesy of Northrop Grumman Space Technology

The model display is part of "Public Service Recognition Week 2007," which runs from May 10 through 13. The theme of the week is "Safety, Science, Security, Technology." This annual national event is sponsored by the Council for Excellence in Government, Employees Roundtable, and it honors men and women who serve America in the Federal, state and local governments. 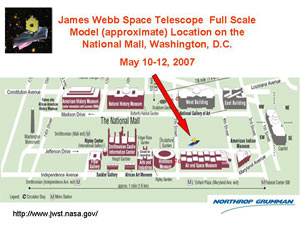 Image left: Map showing the location of the JWST on the National Mall. Click image to enlarge. Credit: Northrop Grumman/NASA

If your plans don't call for a visit to Washington, D.C. in May, you can also watch NASA's "Webb-slinger" on the World Wide Web at the link below!