Asteroids, Comets, Planets: Cut From Same Cloth?
Could all of the asteroids, comets, and planets in our Milky Way galaxy be made of a similar mix of dusty components?

After analyzing the dust particles of a variety of comets with NASA's Spitzer Space Telescope, the Deep Impact spacecraft and the internationally funded Infrared Space Observatory, Dr. Carey Lisse, of the Johns Hopkins University Applied Physics Laboratory in Laurel, Md., suspects that the answer is yes. 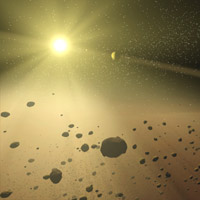 Image right: In this artist's concept, a narrow asteroid belt filled with rocks and dusty debris orbits a star similar to our own sun. Image credit: NASA/JPL-Caltech
+ Browse version of image

"Comets are the stepping stones to planets," said Lisse. "With these missions, astronomers know more about comets today than ever before, and we're still only beginning to scratch the surface."

He presents his findings today at the 38th meeting of the Division for Planetary Sciences of the American Astronomical Society in Pasadena, Calif.

According to Lisse, the Deep Impact mission, which sent an 820-pound impactor into the path of a hurtling comet about 5 by 8 kilometers (3 by 5 miles) wide, provided a "Rosetta stone" for studying solar system formation in the universe. The collision, on July 4, 2005, unleashed a plethora of pristine particles that had been locked in the core of comet Tempel 1 since the dawn of our solar system.

Scientists have determined that comet Tempel 1 is a loosely assembled icy dirtball with the consistency of talcum powder. "The impactor was able to go 20 to 30 meters into the comet and release material that hadn't been baked or boiled by the comet's previous trips around the sun," said Lisse.

Lisse and his team later compared their Tempel 1 data to observations of comet Hale Bopp made by the Infrared Space Observatory in 1997. Although Hale Bopp did not show any of the iron-rich olivine silicates found in Tempel 1, team members did find many chemical similarities, like ice made of water, carbonates, sulfides, polycyclic aromatic hydrocarbons and other types of silicates.

They then looked at the Infrared Space Observatory's observations of a distant solar system called HD 100546, which many scientists believe is undergoing planet formation, and again found many of the materials observed in Hale Bopp and Tempel 1. However, unlike the comets, HD 100546 didn't contain some of the most primitive rock-forming elements.

"Although there are some particle variations, our team has found that Tempel 1, Hale Bopp and HD100546 share many of the same basic chemical compounds," said Lisse. "We think the differences we see are due to the effect of active planet formation, nebular shocks, and collisions in the HD100546 planet-forming disk."

In a new extension of this work, Lisse recently teamed with Dr. Charles Beichman of NASA's Jet Propulsion Laboratory in Pasadena, Calif., to study HD69830, a star surrounded by a disk of dusty material and three Neptune-sized planets. Previously, Beichman and his colleagues suspected the disk could be an asteroid belt. Now, the astronomers have used Lisse's models of planetary body ingredients to confirm that the disk is an asteroid belt, and to show that it may have been created by the destruction of an icy asteroid about 70 kilometers across (43 miles). This is similar to what happened in our own solar system millions of years ago. In addition, the new analysis reveals that the asteroid belt is twice as far out as previously believed, beyond the known planets.

"I am thrilled by these findings. This is one of the first steps to realizing that our solar system may be similar to other solar systems in the universe," he said.