Amazing Andromeda Galaxy
The many "personalities" of our great galactic neighbor, the Andromeda galaxy, are exposed in this new composite image from NASA's Galaxy Evolution Explorer and the Spitzer Space Telescope. 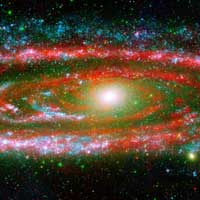 Galaxy Evolution Explorer detected young, hot, high-mass stars, which are represented in blue, while populations of relatively older stars are shown as green dots. The bright yellow spot at the galaxy's center depicts a particularly dense population of old stars.

Swaths of red in the galaxy's disk indicate areas where Spitzer found cool, dusty regions where stars are forming. These stars are still shrouded by the cosmic clouds of dust and gas that collapsed to form them.

Located 2.5 million light-years away, the Andromeda is our largest nearby galactic neighbor. The galaxy's entire disk spans about 260,000 light-years, which means that a light beam would take 260,000 years to travel from one end of the galaxy to the other. By comparison, our Milky Way galaxy's disk is about 100,000 light-years across.