Black Hole Spills Kaleidoscope of Color
Shoes may not come in every color, but space objects do. All objects in space, everything from dust to distant galaxies, give off a rainbow of light - including light our eyes can't see. That's where NASA's Great Observatories come in. Together, they help astronomers see all the shades of the cosmos. 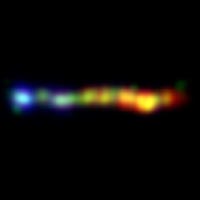 Image right: A new false-colored image from NASA's Hubble, Chandra and Spitzer space telescopes shows a giant jet of particles that has been shot out from the vicinity of a type of supermassive black hole called a quasar. Image credit: NASA/JPL-Caltech/Yale Univ.
+ Browse version of image

A new false-colored image from NASA's Hubble, Chandra and Spitzer space telescopes demonstrates this principle beautifully. The multi-hued portrait shows a giant jet of particles that has been shot out from the vicinity of a type of supermassive black hole called a quasar. The jet is enormous, stretching across more than 100,000 light-years of space - a size comparable to our own Milky Way galaxy!

Quasars are among the brightest objects in the universe. They consist of supermassive black holes surrounded by turbulent material, which is being heated up as it is dragged toward the black hole. This hot material glows brilliantly, and some of it gets blown off into space in the form of powerful jets.

The jet pictured here is streaming out from the first known quasar, called 3C273, discovered in 1963. A kaleidoscope of colors represents the jet's assorted light waves. X-rays, the highest-energy light in the image, are shown at the far left in blue (the black hole itself is well to the left of the image). The X-rays were captured by Chandra. As you move from left to right, the light diminishes in energy, and wavelengths increase in size. Visible light recorded by Hubble is displayed in green, while infrared light caught by Spitzer is red. Areas where visible and infrared light overlap appear yellow.

Astronomers were able to use these data to solve the mystery of how light is produced is quasar jets. Light is created in a few, very different ways. For example, our sun generates most of its light via a process called fusion, in which hydrogen atoms are combined, causing an explosion of light. In the case of this jet, even the most energetic light was unexpectedly found to be the result of charged particles spiraling through a magnetic field, a process known as synchrotron radiation.