A Planet With Planets? Spitzer Finds Cosmic Oddball
Planets are everywhere these days. They have been spotted around more than 150 stars, and evidence is growing that they also circle "failed," or miniature, stars called brown dwarfs. Now, astronomers using NASA's Spitzer Space Telescope say they have found what may be planets-in-the-making in the strangest of places - around a brown dwarf that itself is the size of a planet. 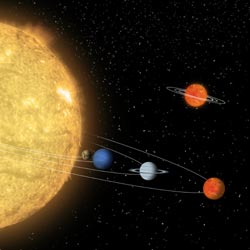 The little brown dwarf, called Cha 110913-773444, is one of the smallest known. At eight times the mass of Jupiter, it is even smaller than several planets around other stars.

Yet, this tiny orb might eventually host a tiny solar system. Spitzer's infrared eyes found, swirling around it, a flat disk made up of dust that is thought to gradually clump together to form planets. Spitzer has previously uncovered similar planet-forming disks around other brown dwarfs, but Cha 110913-773444 is the true dwarf of the bunch.

"Our goal is to determine the smallest 'sun' with evidence for planet formation," said Dr. Kevin Luhman of Pennsylvania State University, University Park, lead author of a new paper describing the findings in the Dec. 10 issue of Astrophysical Journal Letters. "Here, we have a sun that is so small it is the size of a planet."

Astronomers have become more confident in recent years that brown dwarfs share another trait in common with stars - planets. The evidence is in the planet-forming disks. Such disks are well-documented around stars, but only recently have they been located in increasing numbers around brown dwarfs. So far, Spitzer has found dozens of disk-sporting brown dwarfs, five of which show the initial stages of the planet-building process. The dust in these five disks is beginning to stick together into what may be the "seeds" of planets (See http://www.nasa.gov/vision/universe/starsgalaxies/spitzer-20051020.html).

Last year, Luhman and his colleagues used Spitzer to uncover what was then the smallest of brown dwarfs hugged by a disk. At only 15 times the mass of Jupiter, the brown dwarf, called OTS 44, is comparable to the most massive extrasolar planets (See http://www.nasa.gov/vision/universe/starsgalaxies/spitzer-020705.html).

Now, the team has again used Spitzer, this time to detect a disk around Cha 110913-773444, which has only about half the mass of OTS 44. The object itself was discovered by Spitzer with the help of NASA's Hubble Space Telescope, the 4-meter Blanco telescope at the Cerro Tololo Inter-American Observatory in Chile and the Gemini South Observatory, also in Chile. Its cool and dusty disk, however, could be seen by only Spitzer's infrared eyes. The teeny brown dwarf is young at 2 million years old, and lives 500 light-years away in the Chamaeleon constellation.

So, what makes this oddball a brown dwarf and not a planet? "There are two camps when it comes to defining planets versus brown dwarfs," said Dr. Giovanni Fazio, co-author of the new paper from the Harvard-Smithsonian Center for Astrophysics. "Some go by size and others go by how the object formed. For instance, this new object would be called a planet based on its size, but a brown dwarf based on how it formed. The question then becomes what do we call any little bodies that might be born from this disk - planets or moons?"

If one were to call the object a planet, then it would seem Spitzer has discovered its first "moon-forming" disk. But, no matter what the final label may be, one thing is clear: the universe produces some strange solar systems very different from our own.