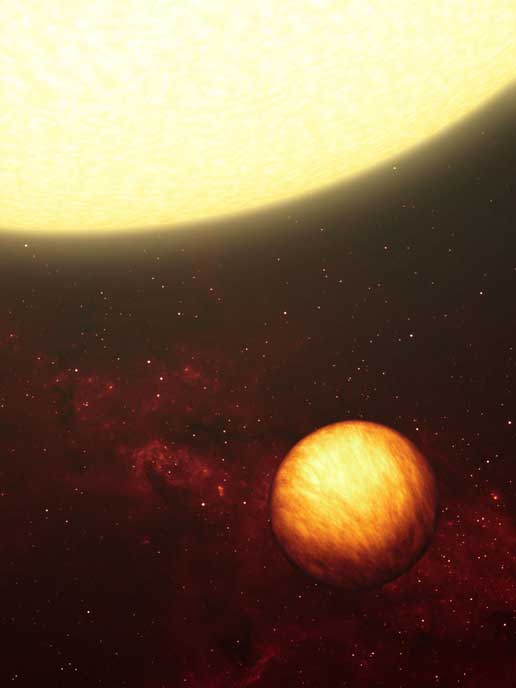 This artist's concept shows a Jupiter-like planet soaking up the scorching rays of its nearby "sun." NASA's Spitzer Space Telescope used its heat-seeking infrared eyes to figure out that a gas-giant planet like the one depicted here is two-faced, with one side perpetually in the cold dark, and the other forever blistering under the heat of its star. The illustration portrays how the planet would appear to infrared eyes, showing temperature variations across its surface.

Upsilon Andromedae b is what's known as a "hot-Jupiter" planet, because it is made of gas like our Jovian giant, and it is hot, due to its tight, 4.6-day-long jaunt around its star. The toasty planet orbits at one-sixth the distance of Mercury from our own sun. It travels in a plane that is seen neither edge- nor face-on from our solar system, but somewhere in between. Scientists do not know how fast Upsilon Andromedae b is spinning on its axis, but they believe that it is tidally locked to its star, just as our locked moon forever hides its "dark side" from Earth's view.

Spitzer observed Upsilon Andromedae b at five points during the planet's trip around its star. The planet's light levels went up or down, as detected by Spitzer, depending on whether the planet's sunlit or dark side was pointed toward Earth. These data indicate that the temperature difference between the two hemispheres of the planet is about 1,400 degrees Celsius (2,550 degrees Fahrenheit).

According to astronomers, this means that the side of the planet that faces the star is always as hot as lava, while the other side could potentially be as cold as ice. Specifically, the hot side of the planet ranges from about 1,400 to 1,650 degrees Celsius (2,550 to 3,000 degrees Fahrenheit), and the cold side from about minus 20 to 230 degrees Celsius (minus 4 to 450 degrees Fahrenheit).

How can one side always be hot? The atmosphere of the planet must be absorbing and reradiating light fast enough that any heated gas circulating around the planet is cooled off before it reaches the dark side.