Image caption: The Light and Dark Sides of a Distant Planet 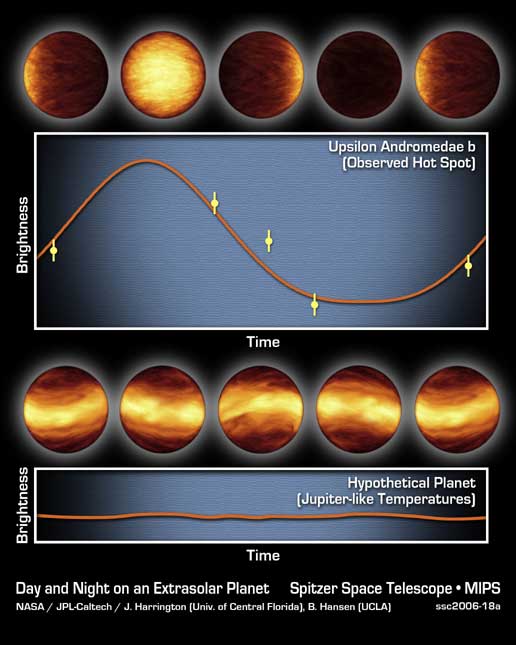 The top graph consists of infrared data from NASA's Spitzer Space Telescope. It tells astronomers that a distant planet, called Upsilon Andromedae b, always has a giant hot spot on the side that faces the star, while the other side is cold and dark. The artist's concepts above the graph illustrate how the planet might look throughout its orbit if viewed up close with infrared eyes.

Spitzer was able to determine the difference in temperature between the two sides of this planet by measuring the planet's infrared light, or heat, at five points during its 4.6-day-long trip around its star. The temperature rose and fell depending on which face, the sunlit or dark, was pointed toward Spitzer's cameras. Those temperature oscillations are traced by the wavy orange curve. They indicate that Upsilon Andromedae b has an extreme range of temperatures across its surface, about 1,400 degrees Celsius (2,550 degrees Fahrenheit). This means that hot gas moving across the bright side of the planet cools off by the time it reaches the dark side.

The bottom graph and artist's concepts represent what astronomers might have seen if the planet had bands of different temperatures girdling it, like Jupiter. Some astronomers had speculated that "hot-Jupiter" planets like Upsilon Andromedae b, which circle very closely around their stars, might resemble Jupiter in this way. If Upsilon Andromedae b had been like this, there would have been no difference between the average temperatures of the sunlit and dark sides to detect, and Spitzer's data would have appeared as a flat line.