NASA's Spitzer Digs Up Troves of Possible Solar Systems in Orion
Astronomers have long scrutinized the vast and layered clouds of the Orion nebula, an industrious star-making factory visible to the naked eye in the sword of the famous hunter constellation. Yet, Orion is still full of secrets.

A new image from NASA's Spitzer Space Telescope probes deep into the clouds of dust that permeate the nebula and its surrounding regions. The striking false-color picture shows pinkish swirls of dust speckled with stars, some of which are orbited by disks of planet-forming dust.

Spitzer, with its powerful infrared vision, was able to unearth nearly 2,300 such planet-forming disks in the Orion cloud complex, a collection of turbulent star-forming clouds that includes the well-known Orion nebula. 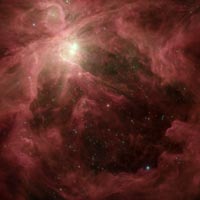 The disks - made of gas and dust that whirl around young suns - are too small and distant to be seen by visible-light telescopes; however, the infrared glow of their warm dust is easily spotted by Spitzer's infrared detectors. Each disk has the potential to form planets and its own solar system.

"This is the most complete census of young stars with disks in the Orion cloud complex," said Dr. Thomas Megeath of the University of Toledo, Ohio, who led the research. "Basically, we have a census of potential solar systems, and we want to know how many are born in the cities, how many in small towns, and how many out in the countryside."

A look at Orion's demographics reveals that the potential solar systems populate a variety of environments. Megeath and his colleagues found that about 60 percent of the disk-sporting stars in the Orion cloud complex inhabit its bustling "cities," or clusters, containing hundreds of young stars. About 15 percent reside in small outer communities, and a surprising 25 percent prefer to go it alone, living in isolation.

Prior to the Spitzer observations, scientists thought that up to 90 percent of young stars, both with and without disks, dwelled in cities like those of Orion.

"The Orion image shows that many stars also appear to form in isolation or in groups of just a few stars," said team member Dr. John Stauffer of NASA's Spitzer Science Center at the California Institute of Technology in Pasadena. "These new data may help us to determine the type of environment in which our sun formed."

Astronomers do not know whether our middle-aged sun grew up in the stellar equivalent of the city or countryside, though most favor a large city scenario. Newborn stars like the ones in Orion tend to drift away from their siblings over time, so it is hard to trace an adult star's origins.

Megeath and his colleagues estimate that about 60 to 70 percent of the stars in the Orion cloud complex have disks. "It is an interesting question why this number isn't 100 percent. Eventually, we may be able to understand why some stars don't have disks," said Megeath.

Spitzer's infrared vision also dug up 200 stellar embryos in the Orion cloud complex, most of which had never been seen before. Stellar embryos are still too young to have developed disks.

The Orion cloud complex is about 1,450 light-years from Earth and spans about 240 light-years of space. Spitzer's wide field of view allowed it to survey most of the complex, an area of the sky equivalent to 28 full moons. The featured image shows a slice of this survey, the equivalent of four full moons-worth of sky, and includes the Orion nebula itself.