Andromeda Adrift in Sea of Dust in New NASA Image
The Andromeda galaxy, named for the mythological princess who almost fell prey to a sea monster, appears tranquil in a new image from NASA's Spitzer Space Telescope. The mesmerizing infrared mosaic shows red waves of dust over a blue sea of stars.

"What's really interesting about this view is the contrast between the galaxy's smooth, flat disk of old stars and its bumpy waves of dust heated by young stars," said Dr. Pauline Barmby of the Harvard-Smithsonian Center for Astrophysics, Cambridge, Mass. Barmby and her colleagues recently observed Andromeda using Spitzer. 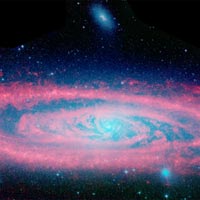 Barmby and her team used the Spitzer data to make drastically improved measurements of Andromeda's infrared brightness. They found that the galaxy shines with the same amount of energy as about 4 billion suns. Based on these measurements, the astronomers confirmed that there are roughly 1 trillion stars in the galaxy. Our Milky Way galaxy is estimated to house a couple of hundred billion stars.

"This is the first time the stellar population of Andromeda has been determined using the galaxy's infrared brightness," said Barmby. "It's reassuring to know our numbers are in agreement with previous estimates of the mass of the stars based on the stars' motion."

The new false-colored portrait also provides astronomers with the best look yet at the dust-drenched spiral arms that swirl out of the galaxy's center, a region hidden by bright starlight in visible-light images. Dust and gas are the building materials of stars. They are clumped together throughout the spiral arms, where new stars are forming.

"The Spitzer data trace with startling clarity the star-forming material all the way into the inner part of the galaxy," said Dr. George Helou, deputy director of NASA's Spitzer Science Center at the California Institute of Technology in Pasadena. "The challenge is to understand what shapes the distribution of this gas and dust, and what modulates the star formation at different locations."

Spitzer's infrared array camera captured infrared light emanating from both older stars (blue) and dust made up of molecules called polycyclic aromatic hydrocarbons (red). These carbon-containing molecules are warmed by sunlight and glow at infrared wavelengths. They are often associated with dense clouds of new stars, and can be found on Earth in barbecue pits and car exhaust, among other places.

The Andromeda galaxy, also known by astronomers as Messier 31, is located 2.5 million light-years away in the constellation Andromeda. It is the closest major galaxy to the Milky Way, making it the ideal specimen for carefully examining the nature of galaxies. On a clear, dark night, the galaxy can be spotted with the naked eye as a fuzzy blob.

Andromeda spans about 260,000 light-years, which means that a light beam would take 260,000 years to travel from one end of the galaxy to the other. By comparison, the Milky Way is about 100,000 light-years across. When viewed from Earth, Andromeda occupies a portion of the sky equivalent to seven full moons.

Spitzer's wide field of view allowed the telescope to capture a complete snapshot of the Andromeda galaxy, though the task wasn't easy. The final mosaic consists of 3,000 or so individual picture frames stitched together seamlessly.

Barmby presented these observations today at the 208th meeting of the American Astronomical Society in Calgary, Canada. A previous image of Andromeda taken with Spitzer's longer-wavelength infrared camera can be found at http://www.spitzer.caltech.edu/Media/releases/ssc2005-20/ssc2005-20a.shtml