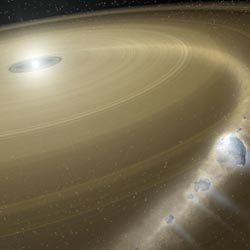 Image right: An artist's concept of a comet being torn to shreds around a dead star, or white dwarf, called G29-38. Image credit: NASA/JPL-Caltech.
+ Full image and caption
+ Browse version of image

The findings suggest the dead star, which most likely consumed its inner planets, is still orbited by a ring of surviving comets and possibly outer planets. This is the first observational evidence that comets can outlive their suns.

"Astronomers have known for decades that stars are born, have an extended middle age, and then wither away or explode. Spitzer is helping us understand how planetary systems evolve in tandem with their parent stars," said David Leisawitz, NASA's Spitzer program scientist.

Astronomers believe white dwarfs are shrunken skeletons of stars that were once similar to Earth's sun. As the stars aged over billions of years, they grew brighter and eventually swelled in size to become red giants. Millions of years later, the red giants shed their outer atmospheres, leaving behind white dwarfs.

If any planets did orbit in these systems, the red giants would have engulfed at least the inner ones. Only distant outer planets and an orbiting icy outpost of comets would have survived.

"The dust seen by Spitzer around G29-38 was probably generated relatively recently when one such outlying comet may have been knocked into the inner region of the system and ripped into dust shreds by the tidal forces of the star," said astronomer William Reach of the Spitzer Science Center at the California Institute of Technology in Pasadena, Calif.

Prior to the Spitzer findings, astronomers studying G29-38 noticed an unusual and unknown source of infrared light. Spitzer, with its powerful infrared spectrometer, was able to break this light apart, revealing its molecular makeup. These data told astronomers the light was coming from the same types of dusty minerals found in comets in our solar system.

"We detected a large quantity of very small, dirty silicate grains," said astronomer Marc Kuchner of NASA's Goddard Space Flight Center, Greenbelt, Md. "The size of these grains tells us they are probably from comets and not other planetary bodies."

In our own solar system, comets reside in the cold outer fringes in regions known as the Kuiper Belt and Oort Cloud. Only when something disturbs their orbits, such as another comet or an outer planet, do they begin periodic journeys into the sun's warmer neighborhood. However, these trips to the tropics often end in destruction. Comets slowly disintegrate as they pass close to the sun, or they crash into it. They also occasionally crash into planets, as comet Shoemaker-Levy 9 did when it plunged into Jupiter.

Though the dust seen by Spitzer around the white dwarf is most likely the remains of such a torn-up comet, there may be other explanations. One possibility is that a second wave of planets formed long after the death of the star, leaving a dusty construction zone.

Kuchner presented his findings today at the 207th meeting of the American Astronomical Society in Washington. The data were also published in the December 20, 2005, issue of the Astrophysical Journal.