Andromeda is the most-studied galaxy outside our own Milky Way, yet Spitzer's sensitive infrared eyes have detected captivating new features, including bright, aging stars and a spiral arc in the center of the galaxy. The infrared image also reveals an off-centered ring of star formation and a hole in the galaxy's spiral disk of arms. These asymmetrical features may have been caused by interactions with the several satellite galaxies that surround Andromeda. 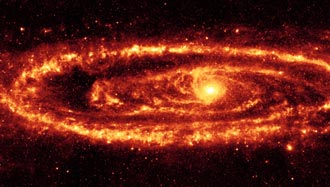 Image right: The Spitzer image reveals new insight into Andromeda's well-known ring of star formation. This ring appears to be split into two pieces, forming the hole to the lower right. These asymmetrical features may have been caused by interactions with satellite galaxies around Andromeda. Image credit: NASA/JPL-Caltech/Univ. of Arizona
+ Larger image

"Occasionally small satellite galaxies run straight through bigger galaxies," said Dr. Karl Gordon of the Steward Observatory, University of Arizona, Tucson, lead investigator of the new observation. "It appears a little galaxy punched a hole through Andromeda's disk, much like a pebble breaks the surface of a pond."

The new false-color Andromeda image is available at http://www.spitzer.caltech.edu/spitzer/ .

Approximately 2.5 million light-years away, Andromeda is the closest spiral galaxy and is the only one visible to the naked eye. Unlike our Milky Way galaxy, which we view from the inside, Andromeda is studied from the outside. Astronomers believe that Andromeda and the Milky Way will eventually merge together.

Spitzer detects dust heated by stars in the galaxy. Its multiband imaging photometer's 24-micron detector recorded approximately 11,000 separate infrared snapshots over 18 hours to create the new comprehensive mosaic. This instrument's resolution and sensitivity is a vast improvement over previous infrared technologies, enabling scientists to trace the spiral structures within Andromeda to an unprecedented level of detail.

"In contrast to the smooth appearance of Andromeda at optical wavelengths, the Spitzer image reveals a well-defined nuclear bulge and a system of spiral arms," said Dr. Susan Stolovy, a co-investigator from the Spitzer Science Center at the California Institute of Technology, Pasadena.

The galaxy's central bulge glows in the light emitted by warm dust from old, giant stars. Just outside the bulge, a system of inner spiral arms can be seen, and outside this, a well-known prominent ring of star formation.