Spitzer Sees Ice and Warm Glows in Dark and Dusty Places
Two new results from NASA's Spitzer Space Telescope released today are helping astronomers better understand how stars form out of thick clouds of gas and dust, and how the molecules in those clouds ultimately become planets. 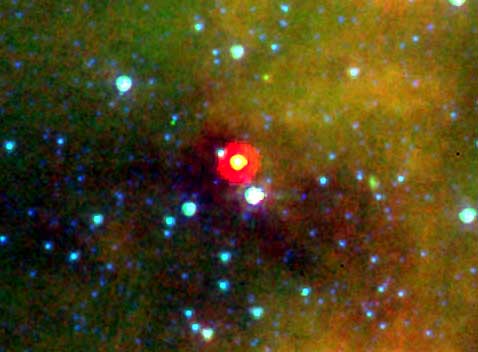 Image above: Spitzer targeted a group of objects with no known stars to study the properties of such regions before any stars have formed. The first of these "starless cores" to be examined held a surprise: a source of infrared light appeared where none was expected. The core is known as L1014, the 1,014th object in a list of dark, dusty "clouds" compiled by astronomer Beverly Lynds over 40 years ago. These have proved to be homes to a rich variety of molecules and are the birthplaces of stars and planets.
+ Click for full image Image coutesy: NASA/JPL-Caltech.


Two discoveries -- the detection of an oddly dim object inside what was thought to be an empty cloud, and the discovery of icy planetary building blocks in a system believed to resemble our own solar system in its infancy -- were presented today at the first Spitzer science conference in Pasadena, Calif. Since Spitzer science observations began less than one year ago, the infrared capabilities of the space observatory have unveiled hundreds of space objects too dim, cool or distant to be seen with other telescopes.

In one discovery, astronomers have detected a faint, star-like object in the least expected of places -- a "starless core." Named for their apparent lack of stars, starless cores are dense knots of gas and dust that should eventually form individual newborn stars. Using Spitzer's infrared eyes, a team of astronomers led by Dr. Neal Evans of the University of Texas at Austin probed dozens of these dusty cores to gain insight into conditions that are needed for stars to form.

Starless cores are fascinating to study because they tell us what conditions exist in the instants before a star forms. Understanding this environment is key to improving our theories of star formation, said Evans.

But when they looked into one core, called L1014, they found a surprise -- a warm glow coming from a star-like object. The object defies all models of star formation; it is fainter than would be expected for a young star. Astronomers theorize that the mystery object is one of three possibilities: the youngest "failed star," or brown dwarf ever detected; a newborn star caught in a very early stage of development; or something else entirely.

This object might represent a different way of forming stars or brown dwarfs. Objects like this are so dim that previous studies would have missed them. It might be like a stealth version of star formation, Evans said. The new object is located 600 light-years away in the constellation Cygnus.

In another discovery, Spitzer's infrared eyes have peered into the place where planets are born -- the center of a dusty disc surrounding an infant star -- and spied the icy ingredients of planets and comets. This is the first definitive detection of ices in planet-forming discs.

This disc resembles closely how we imagine our own solar system looked when it was only a few hundred thousand years old. It has the right size, and the central star is small and probably stable enough to support a water-rich planetary system for billions of years into the future, said Dr. Klaus Pontoppidan of Leiden Observatory in the Netherlands, who led the team that made this discovery.

Previously, astronomers had seen ices, or ice-coated dust particles, in the large cocoons of gas and dust that envelop young stars. But they were not able to distinguish these ices from those in the inner planet-forming portion of a star's disc. Using Spitzer's ultra- sensitive infrared vision and a clever trick, Pontoppidan and his colleagues were able to overcome this challenge.

Their trick was to view a young star and its dusty disc at "dawn." Discs can be viewed from a variety of angles, ranging from the side or edge-on, where the discs appear as dark bars, to face-on, where the discs become washed out by the light of the central star. They found that if they observed a disc at a 20-degree angle, at a position where the star peeks out like our Sun at dawn, they could see the ices.

"We hit the sweet spot," said Pontoppidan. "Our models predicted that the search for ices in discs is a problem of finding an object with just the right viewing angle, and Spitzer confirmed that model."

In this system, astronomers found ammonium ions as well as components of water and carbon dioxide ice.