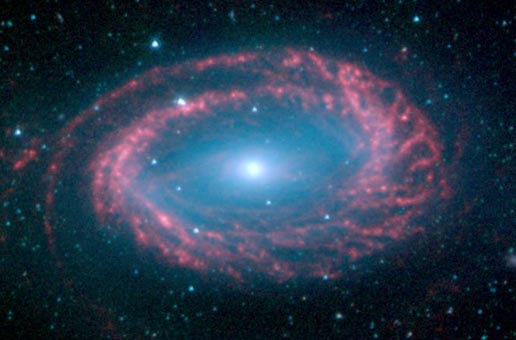 This peculiar galaxy is thought to have only one spiral arm. Most spiral galaxies have two or more arms. Astronomers refer to NGC 4725 as a ringed barred spiral galaxy because a prominent ring of stars encircles a bar of stars at its center (the bar is seen here as a horizontal ridge with faint red features). Our own Milky Way galaxy sports multiple arms and a proportionally smaller bar and ring.

In this false-color Spitzer picture, the galaxy's arm is highlighted in red, while its center and outlying halo are blue. Red represents warm dust clouds illuminated by newborn stars, while blue indicates older, cooler stellar populations. The red spokes seen projecting outward from the arm are clumps of stellar matter that may have been pushed together by instable magnetic fields.

NGC 4725 is located 41 million light-years away in the constellation Coma Berenices.

This picture is composed of four images taken by Spitzer's infrared array camera at 3.6 (blue), 4.5 (green), 5.8 (red), and 8.0 (red) microns. The contribution from starlight (measured at 3.6 microns) has been subtracted from the 5.8- and 8-micron images to enhance the visibility of the dust features.