New Spitzer Discoveries Probe Dusty Origins of Planets
The story of how you and the ground beneath your feet evolved out of space dust is beginning to unfold with a new batch of findings from NASA's Spitzer Space Telescope. 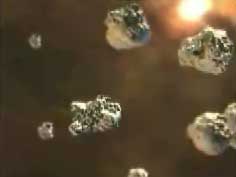 Image right: Artist's concept of icy dust particles. The related animation zooms in on a planet-forming disc around an infant star to reveal the dust particles that make up the disc. NASA's Spitzer Space Telescope detected the raw ingredients for planets in these dust particles. +Click for animation. Animation coutesy: NASA/JPL-Caltech.

These materials, icy dust particles coated with water, methanol and carbon dioxide, may help explain the origin of icy planetoids like comets. Scientists believe these comets may have endowed Earth with some of its water and many of its biogenic, life-enabling materials.

Drs. Dan Watson and William Forrest of the University of Rochester, N.Y, identified the ices. They surveyed five very young stars in the constellation Taurus, 420 light-years from Earth. Previous studies identified similar organic materials in space, but this is the first time they were seen unambiguously in the dust making up planet-forming discs. 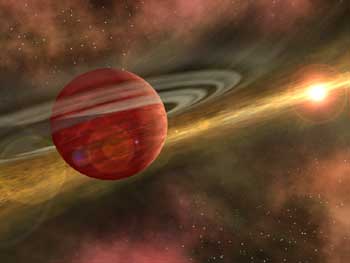 Image left: In this artist's concept, a possible newfound planet spins through a clearing in a nearby star's dusty, planet-forming disc. This clearing was detected around the star CoKu Tau 4 by NASA's Spitzer Space Telescope.
+ Click for full image. Image courtesy: NASA/JPL-Caltech.

In another finding, Spitzer surveyed a group of young stars and found intriguing evidence that one of them may have the youngest planet detected. The observatory found a clearing in the disc around the star CoKu Tau 4. This might indicate an orbiting planet swept away the disc material, like a vacuum leaving a cleared trail on a dirty carpet. The new findings reveal the structure of the gap more clearly than ever before. Because CoKu Tau 4 is about one million years old, the possible planet would be even younger. As a comparison, Earth is approximately 4.5-billion years old.

Spitzer also discovered two of the farthest and faintest planet-forming discs ever observed. These discs surround two of more than 300 newborn stars uncovered for the first time in a stunning new image of the dusty stellar nursery called RCW 49. It is approximately 13,700 light-years from Earth in the constellation Centaurus. 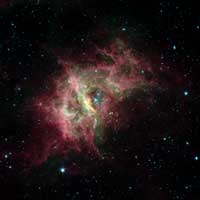 Image right: RCW 49 is one of the most prolific birthing grounds in our Milky Way galaxy. This image taken by Spitzer's infrared array camera highlights the nebula's older stars (blue stars in center pocket), its gas filaments (green) and dusty tendrils (pink). Speckled throughout the murky clouds are more than 300 never-before-seen newborn stars. + Click for full image. Image courtesy: NASA/JPL-Caltech/University of Wisconsin.

The related animation shows what a human eye might see if it could be re-tuned to see different parts of the electromagnetic spectrum. It shows the stellar nursery RCW49 in shifting wavelengths of light, beginning with visible views and ending with Spitzer infrared observations. + Click for animation. Animation courtesy: NASA/JPL-Caltech.

"Preliminary data suggest that all 300 or more stars harbor discs, but so far we've only looked closely at two. Both were found to have discs," said Dr. Ed Churchwell of the University of Wisconsin, Madison, Wis., principal investigator of the RCW 49 research, with Dr. Barbara Whitney of Space Science Institute, Boulder, Colo.

Planet-forming, or "protoplanetary," discs are a natural phase in a star's life. A star is born inside a dense envelope of gas and dust. Within this envelope, and circling the star, is a flat, dusty disc, where planets are born.

"By seeing what's behind the dust, Spitzer has shown us star and planet formation is a very active process in our galaxy," Churchwell said.

Spitzer's exquisitely sensitive infrared eyes can see planet-forming discs in great detail. "Previously, scientists could study only a small sample of discs, but Spitzer is already on its way toward analyzing thousands of discs," Werner said.

Spitzer's infrared spectrograph instrument, which breaks apart infrared light to see the signatures of various chemicals, was used to observe the organic ices and the clearing within CoKu Tau 4's disc. Spitzer's infrared array camera found the new stars in RCW 49. Papers on the research will appear in the September 1 issue of the journal Astrophysical Journal Supplements. For images and information about the research on the Internet, visit: http://www.spitzer.caltech.edu.