Hats Off to Space Day! Spitzer Space Telescope Unveils Sombrero
NASA salutes Space Day, observed this year on May 5, with a new dramatic image of the Sombrero galaxy. Space Day, held the first Thursday each May, is designed to inspire the next generation of explorers. 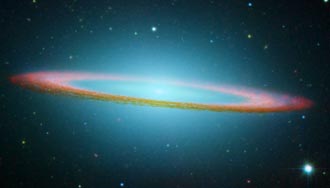 The new Sombrero image is available at http://www.spitzer.caltech.edu/spitzer .

Spitzer adds new detail to the galaxy's bright, bulbous core and its thick, outer dust lanes. Infrared light traces the dust and makes the dark, murky ring glow brilliantly. The clumpy dust ring also becomes transparent in infrared. This allows a clear view of the inner disk of stars within the dust ring.

The Sombrero is one of the most massive objects at the southern edge of the Virgo cluster of galaxies. It is equal in size to 800 billion suns. This spiral galaxy is located 28 million light-years away and is 50,000 light-years across. Viewed from Earth, it is just six degrees away from its equatorial plane.

The survey is one of the six Spitzer Legacy Science projects designed to reveal how stars form in different types of galaxies, and to provide an atlas of galaxy images and spectra for future archival investigations. The Sombrero is one of 75 galaxies being observed by the survey team.

NASA's Jet Propulsion Laboratory, Pasadena, Calif., manages the Spitzer mission for NASA's Science Mission Directorate, Washington. Science operations are conducted at the Spitzer Science Center at the California Institute of Technology in Pasadena. JPL is a division of Caltech.