New Clues Found in Ongoing Mystery of Giant Galactic Blobs
Astronomers have numerous technical terms and numbering systems for describing the universe, but one type of mysterious object has yet to be classified. For now, these oddities are named for their strange appearance. They are called blobs. 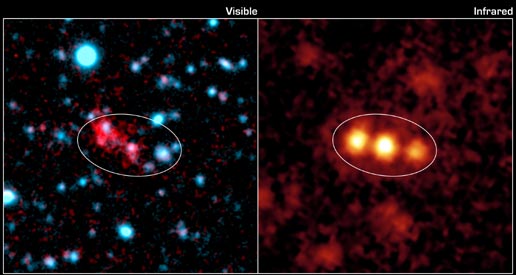 Image above: This image composite shows a giant blob (red, left) and the three merging galaxies NASA's Spitzer Space Telescope discovered within it (yellow, right). Visible light images like the one shown on the left reveal the vast extent of blobs, but don't provide much information about their host galaxies. Using its heat-seeking infrared eyes, Spitzer reveals three monstrously bright galaxies, trillions of times brighter than the Sun, in the process of merging together. Image credit: NASA/JPL-Caltech. + Click for larger image.

At the 205th annual meeting of the American Astronomical Society in San Diego, Calif., astronomers presented new evidence in the case of the giant galactic blobs. These blobs are huge clouds of intensely glowing material that envelop faraway galaxies. Using NASA's Spitzer Space Telescope and its powerful infrared vision, the astronomers caught a glimpse of the galaxies tucked inside the blobs. Their observations reveal monstrously bright galaxies and suggest that blobs might surround not one, but multiple galaxies in the process of merging together.

"It is possible that extremely bright galactic mergers lie at the center of all the mysterious blobs, but we still don't know how they fuel the blobs themselves," said Dr. Harry Teplitz, Spitzer Science Center, California Institute of Technology, Pasadena, Calif., co- author of the new research. "It's like seeing smoke in the distance and now discovering that it's a forest fire, not a house or car fire, but still not knowing whether it was caused by lightning or arson."

The findings will ultimately provide a better understanding of how galaxies, including ones like our own Milky Way, form.

Blobs were first discovered about five years ago with visible-light telescopes. They are located billions of light-years away in ancient galactic structures or filaments, where thousands of young galaxies are clustered together. These large, fuzzy galactic halos are made up of hot hydrogen gas and are about 10 times as large as the galaxies they encompass. Astronomers can see glowing blobs, but they don't know what provides the energy to light them up.

"To figure out what's going on, we need to better characterize the galaxies at the center of the blobs," said Dr. James Colbert, Spitzer Science Center, first author of the study.

That's where Spitzer comes in. Spitzer can sense the infrared glow from the dusty galaxies inside the blobs. When Colbert and colleagues used Spitzer to look at four well-known blobs located in a galactic filament 11 billion light-years away, they discovered that one of them appears to be made up of three galaxies falling into each other -- an unusual cosmic event. The finding is intriguing because previous observations from NASA's Hubble Space Telescope found that another one of the four blobs surrounds a merger between two galaxies. The astronomers speculate that all blobs might share this trait; however, more evidence is needed to close the case.

One clue that the scientists might be on the right track has to do with the infrared brightness of the blob galaxies. To visible-light telescopes, these galaxies appear unremarkable. Spitzer measurements revealed that all four of the galaxies studied are among the brightest in the universe, giving off the equivalent light of trillions of Suns. Such luminous galaxies are often triggered when smaller, gas-rich ones crash together, supporting the notion that galactic mergers might make up the cores of blobs.

Even if galactic mergers are fingered as the culprit, the mystery of the giant galactic blobs will persist. Astronomers will have to figure out why mergers are producing such tremendous clouds of material.

"Far from solving the mystery of the blobs, these observations only deepen it. Not only are the gas clouds bizarre, we now know that they contain some of the brightest and most violent galaxies in the universe," said Teplitz.

Images and additional information about the Spitzer Space Telescope are available at http://www.spitzer.caltech.edu/Media.