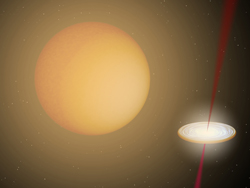 Scientists have found that a nearby two-star system contains a precursor to a Type Ia supernova, an important class of star explosions used to measure the expansion rate of the universe. The observations may help scientists understand how Type Ia supernovae work.

Image right: RS Ophiuchi is a binary star system in our galaxy. This illustration depicts the probable arrangement: a red giant star and a white dwarf in orbit around each other. A red giant is a star similar to our sun nearing the end of its life cycle. Similarly, a white dwarf is a star like our sun that has run out of hydrogen fuel and whose outer layers have floated away, leaving a dense core about the size of the Earth. Gas from the bloated red giant spills onto the white dwarf, builds up around and on its surface, and from time to time will ignite in a thermonuclear blast. This happened in RS Ophiuchi in February 2006. New observations have confirmed the existence of a red giant and white dwarf and have found startling new evidence that the white dwarf may soon explode as a Type Ia supernova. Click image to view larger version. Credit: Rob Hynes, LSU

Using ground-based telescopes and NASA satellites, independent teams documented a rare and violent outburst from this system, called RS Ophiuchi, in February 2006. RS Ophiuchi contains white dwarf and a red giant. This is a surprise arrangement for a future Type Ia, and the finding may have broad implications for the supernova field.

The teams may have for first time imaged the components of such a binary and have found new details of how a red giant feeds matter onto a white dwarf, the star that will ultimately explode.

"One day RS Ophiuchi will explode," said Koji Mukai of NASA Goddard Space Flight Center in Greenbelt, Md., a co-author on the Nature report. "What happened this February is just a little hiccup, but it allowed us to weigh the star and showed us that it's almost heavy enough to go off as a Type Ia supernova. Only the tiniest fraction of white dwarfs become Type Ia."

Scientists had thought that RS Ophiuchi contains a red giant and a white dwarf. A red giant is a star similar to our sun nearing the end of its life cycle. Similarly, a white dwarf is a star like our sun that has run out of hydrogen fuel and whose outer layers have floated away, leaving a dense core about the size of the Earth. Gas from the bloated red giant spills onto the white dwarf, builds up on its surface, and from time to time will ignite in a thermonuclear blast. This happened in RS Ophiuchi in early February.

When the white dwarf accumulates enough mass, about 1.4 solar masses, it will obliterate itself. This catastrophic event is a Type Ia supernova. Because a precise amount of mass is involved, every Type Ia supernova in the universe shines at a unified, known luminosity. As a result, Type Ia supernovae are used as mileage posts across the universe. The apparent brightness, as opposed to its absolute brightness, is a direct measure of distance.

"There's plenty of theoretical work on novae and supernovae, but precise and simultaneous multi-wavelength observations have been lacking until now," said Richard Barry of NASA Goddard, co-author on the Astrophysical Journal article.

With the Rossi X-ray Timing Explorer the scientists measured the mass of the white dwarf to be close to 1.4 solar masses. The star probably still needs hundreds of thousands of years, though, to accumulate the final bit of mass before going supernova.

Barry and his colleagues, including John Monnier, University of Michigan, Ann Arbor, said they might have resolved two objects in RS Ophiuchi with IOTA's the sharp "interferometer" eye. This, along with X-ray data, would confirm the assumption that Type Ia supernovae are born in binaries. Infrared data also indicate that the white dwarf might transform itself into red giant for a few days during the outburst. The X-ray observation revealed material flung from the white dwarf colliding with the red giant's solar wind, providing new details of the interaction between the two stars. The VLBA was used to image the expanding shock wave.

Type Ia supernovae typically have little hydrogen in their ejected gas, so the presence of a hydrogen-rich red giant in a pre-Type Ia environment is surprising. RS Ophiuchi demonstrates that more than one kind of binary could be the source of Type Ia supernovae.

"By studying RS Ophiuchi in many wavelengths, we hope to begin to understand what causes variations among the supposedly standard candles," said Jennifer Sokoloski of Harvard-Smithsonian Center for Astrophysics in Cambridge, Mass., lead author on the Nature report. "This will give us better confidence is measuring distances in the universe, one of the most important topics in cosmology."

The VLBA is an instrument of the National Radio Astronomy Observatory. IOTA, managed by the Harvard-Smithsonian, is part of the Whipple Observatory on Mt. Hopkins in Arizona. The Rossi X-ray Timing Explorer is managed by NASA Goddard.