Pencil Nebula Scribbles Notes from Past 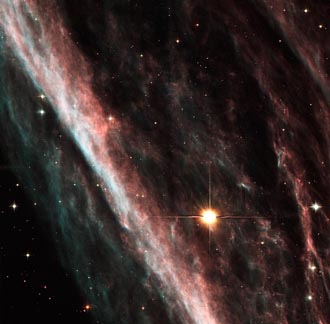 Image to left: As you study this Hubble snapshot of the Pencil Nebula (or NGC 2736), you will see the edge of a sheet of gas left over from a star long gone.

About 11,000 years ago, a star in the southern constellation Vela suddenly grew 250 times brighter than the planet Venus. Ancient skywatchers must have been amazed at this mysterious object. The star was so bright that it could easily be seen during the daytime.

Our early ancestors didn’t realize that they were witnessing a star larger than our Sun explode in a powerful supernova blast. Although this event occurred before recorded history, the supernova blast doubtless was the source of awe, superstition, and lore among numerous tribes and villages throughout the Southern Hemisphere. Even people in southern Europe could see the exploding star, which would have hung low on the horizon over the Mediterranean.

Though the star is long gone, its remnants are still visible today. Gaseous debris from the stellar outburst, known as the Vela supernova remnant, forms a vast footprint in the sky. In the center of the supernova remnant is the star’s flickering core, called a pulsar. The debris takes up so much cosmic real estate that one of its regions was given its own name. Astronomers using NASA’s Hubble Space Telescope probed a small piece of this region, dubbed the Pencil Nebula (officially known as NGC 2736). In the Hubble snapshot, the nebula looks like a rippled sheet. The entire nebula, however, has a strong linear appearance. Sir John Herschel described this linear shape when he discovered the nebula in the 1840s, hence its popular name.

In this snapshot, astronomers are looking along the edge of the undulating sheet of gas. This view shows large, wispy filamentary structures, smaller bright knots of gas, and patches of diffuse gas. The region of the Pencil Nebula captured in this image is about three fourths of a light-year across. The Pencil is about 815 light-years away.

The Pencil’s shape suggests that it is part of the supernova shock wave of debris that recently slammed into a region of dense gas, causing the nebula to glow. As the shock wave travels through space [from right to left in the image], it rams into interstellar material. Initially, the gas is heated to millions of degrees, but then subsequently cools down, emitting the light seen in the image.

For more information about the Hubble program, visit: http://hubble.nasa.gov

For information about NASA, visit: http://www.nasa.gov