Black Hole Record Shattered
In athletic events such as swimming or running, a world record will often stand for several years before it’s broken. The same thing usually holds true for astronomical records as well. 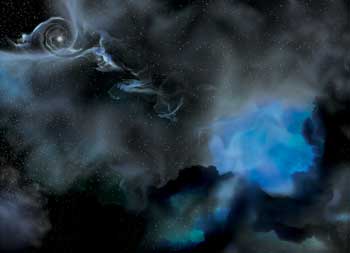 Image right: In this artist’s portrayal of the IC 10 X-1 system, the black hole lies at the upper left and its companion star is on the right. The two objects orbit around a center of gravity once every 34.4 hours. The stellar companion is a type known as a Wolf-Rayet star. Such stars are highly evolved and destined to explode as supernovae. The black hole companion is shedding its outer envelope in a powerful wind, and some of this gas is captured by the black hole’s powerful gravity. + Click for high resolution (1.2 Mb) JPG Credit: Aurore Simonnet/Sonoma State University/NASA.

But in the case of black holes that form when their parent stars explode as a supernova, a record established less than two weeks ago has just been shattered. Black holes are objects with such strong gravity that nothing, not even light, can escape their grasp.

On October 17, astronomers using NASA’s Chandra X-ray Observatory announced that a black hole in the galaxy M33 contains 16 times the mass of the Sun. For two weeks it was the heaviest known black hole of its type. Such black holes are known as "stellar-mass" black holes, because they have masses typical of stars.

But in a paper to be published on November 1, another team is announcing a stellar-mass black hole with at least 24 times the mass of the Sun, and perhaps as many as 33 solar masses.

The team, led by Andrea Prestwich of the Harvard-Smithsonian Center for Astrophysics in Cambridge, Mass., used both Chandra and NASA’s Swift satellite to make its discovery. 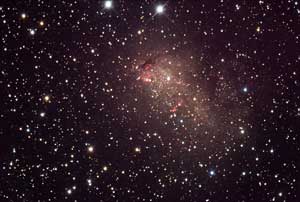 Prestwich is quick to point out that breaking a record is not nearly as important to scientists as learning something new about how black holes form. "We now know that black holes that form from dying stars can be much larger than we had realized," she says. The black hole resides in a small, irregular-shaped galaxy known as IC 10, which is a relatively nearby galaxy 1.8 million light-years from Earth. The black hole is accompanied by a companion star in its journey through space. The two stars orbit around each other. The companion star is blowing off large amounts of gas in a gusty wind, and some of this gas is trapped by the black hole’s powerful gravity. This material is destined to fall into the black hole and disappear from the universe, but as it spirals into the black hole, it heats up and radiates X-rays.

Using Chanda, Prestwich and her colleagues noticed that the system normally emits a lot of X-rays, but every so often, the X-rays disappear. To find out what was happening, she targeted this system with Swift and looked at it over the course of about 10 days in late November 2006. The team found that the X-rays periodically cut off. As the two objects orbit each other, the companion star periodically passes in front of the black hole as seen from Earth, and blocks the X-rays. This is just like the Moon passing in front of the Sun and blocking its light, an event known as an eclipse.

The Swift observations, as well as observations from the Gemini Telescope in Hawaii, told Prestwich and her group how fast the two stars go around each other, This information allowed the team to measure the mass of the black hole. When taking into account the various uncertainties, they determined the black hole has at least 24 times the Sun’s mass, and perhaps as many as 33. Even at the lower end of 24 solar masses, the IC 10 black hole is considerably heavier than the 16-solar-mass black hole in M33.

The discovery raises the obvious question of how this black hole got to be so big. Calculations performed on computers suggest that even the most massive stars in our Milky Way Galaxy leave behind black holes with no more than 15 or 20 solar masses. Even if these stars begin their lives with 100 solar masses, they blow off almost all of their mass in winds and in the supernova explosions that end their lives.

But the black hole in IC 10 probably formed from a star with a different chemical composition than the stars that currently reside in our Milky Way. Specifically, the parent star probably had a very low fraction of elements heavier than hydrogen and helium, the two lightest elements on the Periodic Table. Computer calculations show that such stars will blow off less gas in winds before they explode, so they can leave behind heavier black holes.

Prestwich’s colleague Roy Kilgard of Wesleyan University in Middletown, Conn., points out that massive stars in our galaxy today are probably not producing very heavy stellar-mass black holes. But, he adds, "There could be millions of heavy stellar-mass black holes lurking out there that were produced early in the Milky Way’s history, before it had a chance to build up heavy elements."

Even though the IC 10 black hole breaks the record for largest stellar-mass black hole, it’s puny compared to black holes in the centers of large galaxies. These monsters formed early in the universe’s history by a mechanism that remains unknown. They contain millions or even billions of times the mass of our Sun, and are thus known as "supermassive" black holes.