Astronomers See Our Origins in 20-Year-Old Star Explosion
In 1987 a massive star exploded in a neighboring galaxy, an event called a supernova. It was the closest supernova to Earth since the invention of the telescope centuries ago. Major observatories and millions of people worldwide turned to watch the death of this star.

Now, nearly 20 years after the star's death, the explosion is revealing signs of life---in the form of dust particles that are the building blocks of rocky planets and all living creatures. And astronomers once again are captivated. 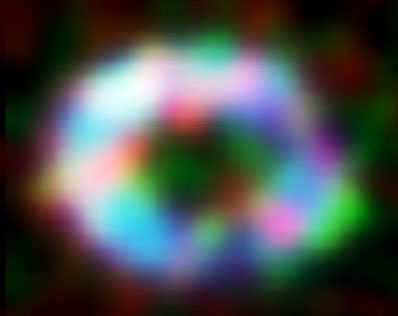 Image above: This image of SN 1987A combines data from NASA's orbiting Chandra X-ray Observatory and the 8-meter Gemini South infrared telescope in Chile, which is funded primarily by the National Science Foundation. The X-ray light detected by Chandra is colored blue here. The infrared light detected by Gemini South is shown as green and red, marking regions of slightly higher and lower-energy infrared, respectively. The core remain of the star that exploded in 1987 is not visible here. The ring is produced by hot gas (largely the X-ray light) and cold dust (largely the infrared light) from the exploded star interacting with the interstellar region. Credit: Gemini/NASA

"Supernova 1987A is changing right before our eyes," said Dr. Eli Dwek, a cosmic dust expert at NASA Goddard Space Flight Center in Greenbelt, Md. For several years Dwek has been following this supernova, named 1987A for the year it was discovered in the Large Magellanic Cloud, a neighboring dwarf galaxy. "What we are seeing now is a milestone in the evolution of a supernova."

Using infrared telescopes, Dwek and his colleagues detected silicate dust created by the star from before it exploded. This dust survived the intense radiation from the explosion. Nearly 20 years onward, the supernova shock wave blasting through the debris that was shed by the star prior to its fiery death is now sweeping up this dust, making the material "visible" to infrared detectors.

Dust---chemical particles and crystals finer than beach sand---is both a frustration and a fascination for astronomers. Dust can obscure observations of distant stars. Yet dust is the stuff from which all solid bodies are formed. This is why dust research, as bland as it sounds, is one of the most important topics in astronomy and astrobiology.

Dust is made in stars and hurled into space by stellar winds and supernovae, and it is found everywhere in the universe. But little is known about its origin and the processes that affect it. How much dust is made in a star? How much survives the star explosion and subsequent journey through interstellar space? And how do wispy dust clouds form planets and ultimately life?

These are the questions that scientists such as Eli Dwek and his colleague Dr. Patrice Bouchet of the Observatoire de Paris want to answer. With 1987A, they have a perfect laboratory to watch the process unfold.

This is new territory for astronomers, said Bouchet, whose research team made infrared observations of SN 1987A with the Gemini South telescope in Chile. Bouchet’s team is witnessing processes never before seen. This is the first time scientists have direct evidence of dust from a large star surviving a supernova; the first time they detect cold dust intermingled in hot, X-ray-emitting gas of millions of degrees; and the first time they are witnessing sputtering, the process in which dust is eroded by collisions with hot gas.

They frankly don't know what to expect, and they have already stumbled upon a few surprises.

Infrared telescopes are crucial for this kind of observation. The dust is over a hundred degrees below the freezing point of water and too cold to emit visible light. Infrared is a less-energetic form of radiation than visible light. So while optical telescopes like Hubble can see gas, infrared instruments, similar to night-vision goggles, are needed to see the cold, dark dust.

Through high-resolution infrared imaging with the 8-meter Gemini South telescope, the science team determined that the dust is in the region of the equatorial ring of gas around SN 1987A. This ring of gas and dust, about a light year across, is expanding only very slowly. This suggests that the ring was shed by the star about 600,000 years before it exploded, and that the dust in the ring was formed in the stellar wind and not in the following supernova explosion.

The blast wave from the star’s explosion has now caught up with the ring. The collision has shocked the gas and raised the gas temperature to 10 million degrees, which heats the dust, causing it to glow at infrared wavelengths.

"This much was expected," said Bouchet. "The collision between the ejecta of Supernova 1987A and the equatorial ring was predicted to occur sometime in the interval of 1995 to 2007, and it is now underway."

With the location of the dust determined, the scientists used the fine eye of NASA's Spitzer Space Telescope to determine the composition of the dust. To their great surprise, the dust was pure silicate particles.

Another key finding is that the team has detected far less dust than expected. A star as massive as the one that blew apart in SN 1987A likely produced more silicate dust in the years before the supernova. The under-abundance of dust detected by Spitzer and Gemini South could mean that supernova blast waves destroy more dust than thought possible. If confirmed, this will have broad implications for determining dust origins throughout the universe.

Yet this is a work in progress. "Overall, we are witnessing the interaction of the supernova blast wave with its surrounding medium, creating an environment that is rapidly evolving at all wavelengths," said Bouchet.

For that reason scientists are planning a series of new infrared, optical, and X-ray observations of SN 1987A with Spitzer, Hubble and Chandra, NASA's three Great Observatories, now that the supernova has once again become very interesting. Who knows what will be revealed once the dust settles?