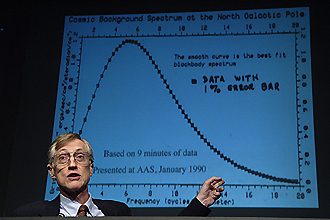 Dr. John C. Mather of NASA's Goddard Space Flight Center has won the 2006 Nobel Prize for Physics, awarded by the Royal Swedish Academy of Sciences. Mather shares the prize with George F. Smoot of the University of California for their collaborative work on understanding the Big Bang.

Mather and Smoot analyzed data from NASA's Cosmic Background Explorer (COBE), which studied the pattern of radiation from the first few instants after the universe was formed. In 1992, the COBE team announced that they had mapped the primordial hot and cold spots in the cosmic microwave background radiation. These spots are related to the gravitational field in the early universe, only instants after the Big Bang, and are the seeds for the giant clusters of galaxies that stretch hundreds of millions of light years across the universe.

NASA Administrator Michael Griffin had this to say, "I am thrilled to hear that Dr. John Mather has been selected to receive the Nobel Prize in Physics. John would be a world-class scientist no matter where he had chosen to spend his career, but we at NASA are enormously proud that he has chosen to spend it with us." 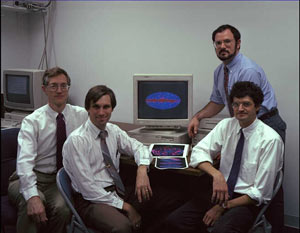 The team also showed that the big bang radiation has a spectrum that agrees exactly with the theoretical prediction, confirming the Big Bang theory and showing that the Big Bang was complete in the first instants, with only a tiny fraction of the energy released later.

Dr. Mather joined the Goddard Space Flight Center in Greenbelt, Maryland to head the Cosmic Background Explorer (COBE) Mission as Project Scientist. He has been a Goddard Fellow since 1994 and currently serves as Senior Project Scientist and Chair of the Science Working Group of the James Webb Space Telescope (JWST) Mission. He is also working on the SAFIR , SPECS, GEST, and WISE missions. Dr. Mather's numerous awards include the John C. Lindsay Memorial Award, National Air and Space Museum Trophy, AIAA Space Science Award, Aviation Week and Space Technology Laurels for Space/Missiles, Dannie Heinemann Prize for Astrophysics, Rumford Prize, the Benjamin Franklin Medal in Physics, and membership in the National Academy of Sciences. He has been elected to the American Astronomical Society Council. 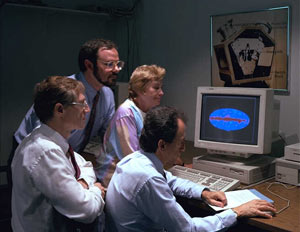