Image above: This dazzling Chandra X-ray image shows a multitude of X-ray sources in our galaxy's center. While most of these sources are from black holes and neutron stars, scientists have found that most of the X-rays in our galaxy come from millions on relatively dim sources that cannot be imaged, namely white dwarfs and stars with active coronas. Credit: NASA/UMass/D.Wang et al.

The origin of this X-ray counterpart to the Milky Way, known to scientists as the galactic X-ray background, has been a long-standing mystery. Scientists have determined the background is not diffuse, as many have thought. Rather, it emanates from untold hundreds of millions of individual sources dominated by a type of dead star called a white dwarf, along with stars with unusually strong coronas.

If confirmed, this new finding would have a profound impact on our understanding of the history of our galaxy, from star-formation and supernova rates to stellar evolution. The result solves major theoretical problems yet points to a surprising undercounting of stellar objects, perhaps by a hundredfold.

Scientists from the Max Planck Institute for Astrophysics in Garching, Germany and the Space Research Institute of the Russian Academy of Sciences in Moscow discuss these results in two papers that will be published in future editions of Astronomy & Astrophysics.

"From an airplane you can see a diffuse glow from a city at night," said lead author Mikhail Revnivtsev of the Max Planck Institute for Astrophysics. "To simply say cities produce light is not enough. Only when you get closer do you see individual sources that make up that glow - the house lights, street lamps and automobile headlights. In this respect, we have identified the individual sources of local X-ray light. What we found will surprise many scientists." 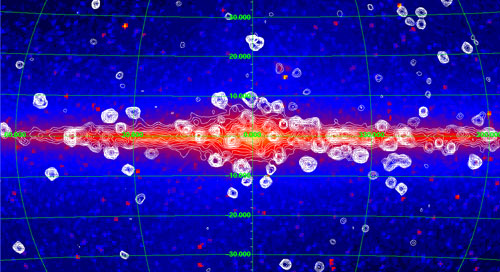 Image above: This is an image of the galactic X-ray background superimposed on an image of infrared sources. The X-rays, shown as white contour lines, were detected by NASA's Rossi X-ray Timing Explorer. The infrared background (everything else) was detected by NASA's COBE mission in the 1990s. The white knots reveal very bright X-ray sources, mostly from black hole and neutron star activity. Most of the X-rays in our galaxy, however, come from millions on relatively dim sources that cannot be imaged. These are the thin, white, wavy lines throughout the galaxy. These appear to be almost entirely unseen white dwarfs and stars with active coronas, a surprise discovery. Credit: NASA/RXTE-COBE/Revnivtsev et al.

X-rays are a high-energy light form, invisible to our eyes and far more energetic than optical light. The X-ray background is more pervasive than the optical haze called the "Milky Way," leading astronomers to think the X-ray haze is diffuse, not from point sources. Previous observations have not revealed enough X-ray sources to account for the "X-ray Milky Way." This has led to theoretical problems. If the X-ray glow were from hot and diffuse gas, it would ultimately rise and escape the confines of the galaxy. Also, all that hot gas would need to have come from millions of past star explosions called supernovae, which would imply estimates of star formation and star death were way off.

"X-ray telescopes that can resolve the emission into discrete sources looked but could not account for more than 30 percent of the emission," said Jean Swank, project scientist for the Rossi Explorer at NASA's Goddard Space Flight Center, Greenbelt, Md. "Many have thought that the lion's share was truly diffuse, for example, from hot gas between the stars."

The new study is based on nearly 10 years of data collected by the Rossi Explorer and constitutes the most thorough map of the galaxy in X-rays. The science team concluded the Milky Way galaxy is teeming with X-ray stars, most of them not very bright, and that scientists over the years had underestimated their numbers.

Surprisingly, the regular suspects of X-ray emission, black holes and neutron stars, are not implicated here. At higher X-ray energies, the glow arises nearly entirely from sources called cataclysmic variables. A cataclysmic variable is a binary star system containing a relatively normal star and a white dwarf, which is a stellar ember of a star like the Earth's sun that has run out of fuel. On its own, a white dwarf is dim. In a binary, it can pull away matter from its companion star to heat itself in a process called accretion. The accreted gas is very hot, a source of considerable X-rays.

At lower X-ray energies, the glow is a mix of about one-third cataclysmic variables and two-thirds active stellar coronas. A corona is the outermost part of a star's atmosphere. Most of the stellar corona activity also takes place in binaries, where a nearby companion effectively stirs up the outer parts of the star. That energizes the stellar analog to solar flares, which emit X-rays. The science team said there are upwards of a million cataclysmic variables in our galaxy and close to a billion active stars. Both of these numbers reflect a major undercounting in previous estimates.

The scientists could not image individual objects. What they saw was a perfect match between X-rays and infrared light detected by NASA's Cosmic Background Explorer mission in the 1990's. This indicates X-ray emission traces the stellar mass distribution and implies that the galactic X-ray background comprises a huge number of faint discrete sources.

Goddard manages the Rossi Explorer, which was launched in December 1995.