NASA Helps Space Telescope Camera "Squint" for a Better View of Galaxies
NASA engineers and scientists have created something that will give better information about far away galaxies. This new creation, which will be in a future space telescope, is so tiny that it's the width of a few hairs. 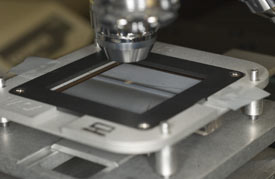 Image right: Using a microscope to look at a collection of Microshutters, called an "array" you can see a hair in the picture for a size comparison. Click image to enlarge. Credit: NASA/Chris Gunn

"Microshutters" are tiny doorways that bring stars and galaxies very far away into better focus. This new technology will go aboard the James Webb Space Telescope, to be launched into space in a decade.

The microshutters will enable scientists to block unwanted light from objects closer to the camera in space, letting the light from faraway objects shine through. To get an idea of how these tiny little "hairlike" shutters work, think about how you try to make something look clearer – you squint. By squinting, your eyelashes block out light closer to you. That's similar to how the microshutters work. 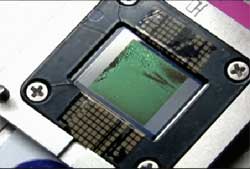 These microshutters will allow the telescope to focus on the faint light of stars and galaxies so far away, they formed early in the history of the universe. That's because light travels at 186,000 miles per second, and light is still traveling through space from the time the universe started. No other telescope has this microshutter technology.

The Webb Telescope will take over for the Hubble Space Telescope. It is planned for launch in the next decade. 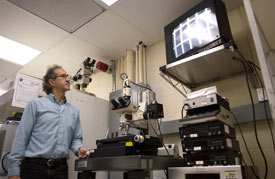 Image right: Murzy Jhabvala, Chief Engineer of the Instrument Technology and Systems Division at Goddard standing at a microscope with a microshutter "array" on it, that is being magnified and shown on the TV. Credit: NASA/Chris Gunn

New technology always gets tested and re-tested to make sure it's ready to go on a spacecraft. In December 2006, the microshutters passed important tests that showed they can handle the stresses of being launched and placed in deep space.

The microshutters were designed, built and tested at NASA's Goddard Space Flight Center in Greenbelt, Md. They will work with a camera scheduled to be onboard the telescope called the "Near Infrared Spectrograph," which will be built by the European Space Agency. The spectrograph will break up the light from the galaxies into a rainbow of different colors, allowing scientists to determine the kinds of stars and gasses that make up the galaxies and measure their distances and motions. 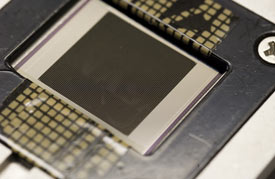 Image left: This is an array of microshutters, about the size of a postage stamp. + High resolution Credit: NASA/Chris Gunn

"To build a telescope that can peer farther than Hubble can, we needed brand new technology," said Murzy Jhabvala, chief engineer of Goddard's Instrument Technology and Systems Division. "We've worked on this design for over six years, opening and closing the tiny shutters tens of thousands of times in order to perfect the technology."

Each shutter measures 100 by 200 microns, or about the width of three to six human hairs. These tiny shutters are arranged in a waffle-like grid containing over 62,000 shutters. The telescope will contain four of these waffle-looking grids all put together. They also have to work at the incredibly cold temperature of minus 388 degrees Fahrenheit (-233 degrees Celsius). 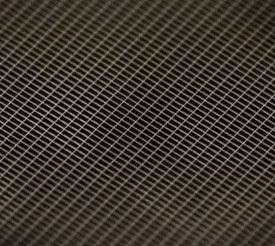 The big benefit of the microshutters is that they will allow scientists to look at 100 things in space at the same time and see deeper into space in less time.

"The microshutters are a remarkable engineering feat that will have applications both in space and on the ground, even outside of astronomy in biotechnology, medicine and communications," said Harvey Moseley, the Microshutter Principal Investigator.