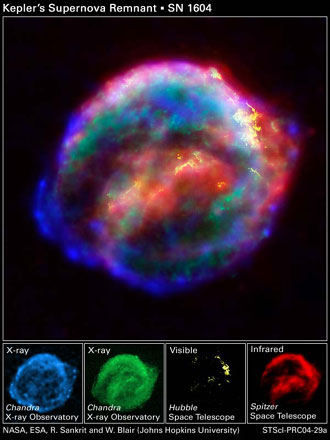 The composite view of the supernova splits into its three components: blue-green for Chandra, yellow for Hubble, and red for Spitzer. Each observatory's full image is then shown for side-by-side comparison, beginning with Chandra, then Hubble, and finally Spitzer. Click for larger image
>View Animation | >Supernova Explosion
Four hundred years ago, sky watchers, including the famous astronomer Johannes Kepler, best known as the discoverer of the laws of planetary motion, were startled by the sudden appearance of a "new star" in the western sky, rivaling the brilliance of the nearby planets.

Modern astronomers, using NASA's three orbiting Great Observatories, are unraveling the mysteries of the expanding remains of Kepler's supernova, the last such object seen to explode in our Milky Way galaxy.

When a new star appeared Oct. 9, 1604, observers could use only their eyes to study it. The telescope would not be invented for another four years. A team of modern astronomers has the combined abilities of NASA's Great Observatories, the Spitzer Space Telescope, Hubble Space Telescope and Chandra X-ray Observatory, to analyze the remains in infrared radiation, visible light, and X-rays. Ravi Sankrit and William Blair of the Johns Hopkins University in Baltimore lead the team.

The combined image unveils a bubble-shaped shroud of gas and dust, 14 light-years wide and expanding at 6 million kilometers per hour (4 million mph). Observations from each telescope highlight distinct features of the supernova, a fast-moving shell of iron-rich material, surrounded by an expanding shock wave sweeping up interstellar gas and dust.

"Multi-wavelength studies are absolutely essential for putting together a complete picture of how supernova remnants evolve," Sankrit said. Sankrit is an associate research scientist, Center for Astrophysical Sciences at Hopkins and lead for Hubble astronomer observations.

"For instance, the infrared data are dominated by heated interstellar dust, while optical and X-ray observations sample different temperatures of gas," Blair added. Blair is a research professor, Physics and Astronomy Department at Hopkins and lead astronomer for Spitzer observations. "A range of observations is needed to help us understand the complex relationship that exists among the various components," Blair said.

The explosion of a star is a catastrophic event. The blast rips the star apart and unleashes a roughly spherical shock wave that expands outward at more than 35 million kilometers per hour (22 million mph) like an interstellar tsunami. The shock wave spreads out into surrounding space, sweeping up any tenuous interstellar gas and dust into an expanding shell. The stellar ejecta from the explosion initially trail behind the shock wave. It eventually catches up with the inner edge of the shell and is heated to X-ray temperatures.

Visible-light images from Hubble's Advanced Camera for Surveys reveal where the supernova shock wave is slamming into the densest regions of surrounding gas. The bright glowing knots are dense clumps that form behind the shock wave. Sankrit and Blair compared their Hubble observations with those taken with ground-based telescopes to obtain a more accurate distance to the supernova remnant of about 13,000 light-years. 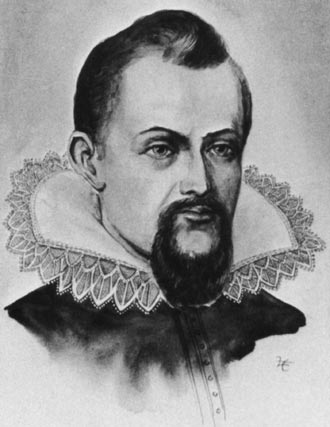 German Astronomer Johannes Kepler, best known for the laws of planetary motion. Kepler documented the explosion of a supernova in 1604, which was the last such event observed in our Milky Way galaxy and would later be known as "Kepler's supernova." Photo credit: Courtesy of the Archives, California Institute of Technology

The astronomers used Spitzer to probe for material that radiates in infrared light, which shows heated microscopic dust particles that have been swept up by the supernova shock wave. Spitzer is sensitive enough to detect both the densest regions seen by Hubble and the entire expanding shock wave, a spherical cloud of material. Instruments on Spitzer also reveal information about the chemical composition and physical environment of the expanding clouds of gas and dust ejected into space. This dust is similar to dust which was part of the cloud of dust and gas that formed the Sun and planets in our solar system.

The Chandra X-ray data show regions of very hot gas. The hottest gas, higher-energy X-rays, is located primarily in the regions directly behind the shock front. These regions also show up in the Hubble observations and also align with the faint rim of material seen in the Spitzer data. Cooler X-ray gas, lower-energy X-rays, resides in a thick interior shell and marks the location of the material expelled from the exploded star.

There have been six known supernovas in our Milky Way over the past 1,000 years. Kepler's is the only one for which astronomers do not know what type of star exploded. By combining information from all three Great Observatories, astronomers may find the clues they need. "It's really a situation where the total is greater than the sum of the parts," Blair said. "When the analysis is complete, we will be able to answer several questions about this enigmatic object." Gay Yee Hill 818/354-0344
Spitzer Science Center, Pasadena, Calif.