PASADENA, Calif.- Using natural "gravitational lenses," an international team of astronomers claim to have found the first traces of a population of the most distant galaxies yet seen-the light we see from them today left more than 13 billion years ago, when the universe was just 500 million years old.

Team leader Richard Ellis, the Steele Family Professor of Astronomy at the California Institute of Technology, will present images of these faint and distant objects in his talk on July 11 at the "From IRAS to Herschel and Planck" conference at the Geological Society in London. The meeting is being held to celebrate the 65th birthday of Royal Astronomical Society President Professor Michael Rowan-Robinson.

Image right: A mosaic of six distant galaxies located by gravitational lensing. Each image, taken with the NIRSPEC instrument on Keck II, reveals a faint spectrum line (circled) in the infrared spectral region which the astronomers interpret as arising from a line of neutral hydrogen, significantly `redshifted' from its normal location in the ultraviolet. The team has invested significant amounts of observing time to eliminate the possibility that each faint line arises from a different atomic species, for example as would be the case if the galaxies were at less extreme distances. Image credit: Caltech
+ Larger view

When light from very distant bodies passes through the gravitational field of much nearer massive objects, it bends in an effect known as "gravitational lensing." In a pioneering technique, the Caltech-led group used massive clusters of galaxies-the best example of natural gravitational lenses-in a series of campaigns to locate progressively more distant systems that would not be detected in normal surveys. The team found the galaxies using the 10-meter Keck II telescope, sited atop Mauna Kea on the Big Island of Hawaii.

Ellis explains, "Gravitational lensing is the magnification of distant sources by foreground structures. By looking through carefully selected clusters, we have located six star-forming galaxies seen at unprecedented distances, corresponding to a time when the universe was only 500 million years old, or less than four percent of its present age."

It is thought that when the universe was 300,000 years old it entered a period when no stars were shining. Cosmologists refer to this phase of cosmic history as the "Dark Ages." Pinpointing the moment of "cosmic dawn" when the first stars and galaxies began to shine and the Dark Ages ended is a major observational quest and provides the motivation for building future powerful telescopes such as the Caltech's Thirty Meter Telescope, and the space-borne James Webb Telescope.

The new survey is the culmination of three years' painstaking observations which represent the thesis of Caltech graduate student Dan Stark. "Using Keck II, we have detected six faint star-forming galaxies whose signal has been boosted about 20 times by the magnifying effect of a foreground cluster. That we should find so many distant galaxies in our small survey area suggests they are very numerous indeed. We estimate the combined radiation output of this population could be sufficient to break apart (ionize) the hydrogen atoms in space at that time, thereby ending the Dark Ages," said Stark. 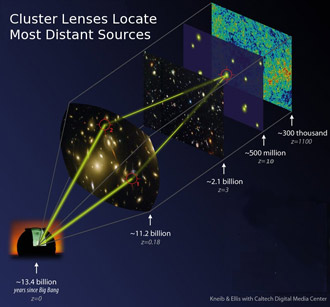 Image left: How gravitational lensing works: Caltech astronomers have pioneered the use of foreground clusters of galaxies as `natural telescopes' to boost faint signals from the most distant sources, seen as they were when the Universe was only a few percent of its current age. Typical magnification factors are 20 times, thereby bringing into view young galaxies that would otherwise be unobservable. This technique has allowed the Caltech astronomers to locate a new population of early feeble sources which may be sufficiently numerous to be responsible for drawing the so-called `Dark Ages' to a close. Image credit: Caltech
+ Larger view

Proving definitively that each of the six objects is unambiguously at these enormous distances (and hence being viewed at such early times) is hard, even with the most powerful instruments. "As with all work at the frontiers, skeptics may wish to see further proof that the objects we are detecting with Keck are really so distant," confessed Ellis. However, in addition to numerous checks the team has made (described in their published scientific article) following their initial discovery a year ago, Ellis and Stark point to supporting evidence from galaxies containing old stars that are seen when the universe was just a bit older.

"We can infer the universe had a lot of star formation at these early times from Spitzer Space Telescope measurements of larger galaxies seen when the universe was about 300 to 500 million years older," explains Stark. "These galaxies show the tell-tale sign of old stars (and were described in earlier work by Ellis and Stark with UK scientist Andrew Bunker). To produce these old stars requires significant earlier activity, most likely in the fainter star-forming galaxies we have now seen." 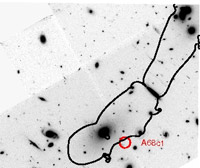 Image right: A selection of Hubble Space Telescope images of the cluster fields with the newly-located sources marked. In total 9 clusters were searched for early sources and 6 were found in the fields of three. Each foreground cluster of galaxies acts as a natural telescope and the magnification is predicted to be particularly strong along `critical lines' (marked as black curves). The Caltech team used the Keck infrared spectrograph to search specifically along these regions. Image credit: Hubble Space Telescope
+ Larger view

Also associated with the program is Caltech postdoctoral scholar Johan Richard, who is leading a similar, but independent, survey of magnified galaxies detected with the Hubble and Spitzer space telescopes. Although that work is not yet complete, preliminary findings support the conclusions of the Keck II survey. European collaborators include Jean-Paul Kneib of the Laboratory of Astrophysics at Marseilles, and Graham Smith at the University of Birmingham.

FURTHER INFORMATION
Details of the conference can be found at: + http://www.ras.org.uk/
+ http://astro.ic.ac.uk/Research/herschel_conference/

IMAGES:
Images of the new galaxies and a description of the technique used can be seen at: + http://www.astro.caltech.edu/~johan/cosmic_dawn/