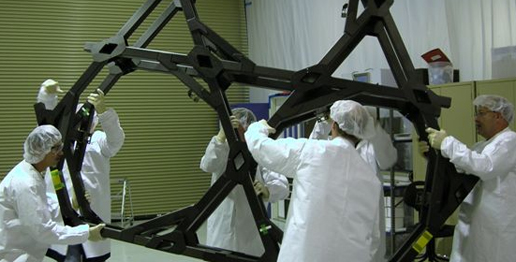 The "spine" of the James Webb Space Telescope, called the backplane, is in great health for space, according to scientists and engineers. Recent tests show that the backplane, which supports the big mirrors of the telescope, can handle its trip into space and operate correctly when the observatory launches in 2013.

The James Webb Space Telescope (JWST) will explore many wonders in space– from distant galaxies to nearby planets and stars. From the first light after the Big Bang to the formation of star systems that can support life on planets like Earth, JWST will give scientists clues about the formation of the universe and the evolution of our own solar system.

The telescope is as big as a two-story house and involves 10 different technologies. Engineers thoroughly test each of them to make sure that it can do what it's intended to do, and that it can survive the trip into space and a life in the harsh space environment. The technologies are both hardware (like the backplane) and computer software.

The backplane endured freezing conditions during the "health tests" at NASA's Marshall Space Flight Center in Huntsville, Ala. It is the largest structure ever tested in freezing temperatures, a necessary step to make sure it won't move in extreme cold. 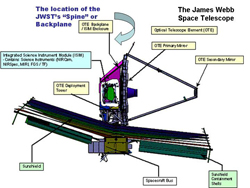 Image right: This schematic of the James Webb Space Telescope includes the location of the "backplane" or "spine" of the observatory. Credit: NASA. Click on image to enlarge.

"We need it to hold steady while we're observing," said Dr. John Mather, JWST Senior Project Scientist at NASA's Goddard Space Flight Center in Greenbelt, Md. "These tests show that it will do that," he said. The movements were so small they were measured in nanometers (one nanometer is smaller than a human hair).

The backplane was tested in cold as low as minus 405 degrees Fahrenheit (30 Kelvin) to minus 351 Fahrenheit (60 Kelvin) over periods lasting two to three days. From late June through mid-September, the tests took place in a special vacuum chamber at Marshall's X-Ray Calibration Facility.

All of the JWST technologies have to pass this same test. If they all pass, it means these hardware and software systems can handle their space trip and work in space. Scientists and engineers then "engineer" them, or apply them, to make them work with other technologies on JWST.

Northrop Grumman Corporation leads a team that is designing and building JWST under a contract with NASA.