NASA Scientists Conduct Census of Nearby Hidden Black Holes
Scientists on a quest to find hidden black holes in the local universe have found surprisingly few. 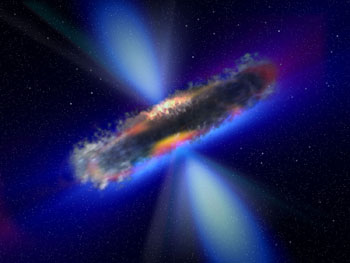 Image to right: This illustration shows the thick dust torus that astronomers believe surrounds supermassive black holes and their accretion discs. When the torus is seen edge-on’ as in this case, much of the light emitted by the accretion disc is blocked. However, the sharp X-ray and gamma-ray eyes of INTEGRAL can peer through the thick dust and locate "hidden" black holes. INTEGRAL's survey of the local universe searched for hidden black holes but found few, which implies these kinds of black holes are largely in the more distant (earlier) universe.
+ High resolution jpg/+ High resolution TIF image (6 MB) Credit: ESA / V. Beckmann (NASA-GSFC)

The observation implies that if these hidden black holes exist---and most scientists are convinced they do---they must be from the more distant, earlier universe, a concept that has interesting implications for galaxy evolution.

This work constitutes the first census of the highest-energy part of the X-ray sky, where the most dust-enshrouded black holes are thought to shine. A team from NASA's Goddard Space Flight Center in Greenbelt, Md., conducted the census, comprised of nearly two years of continuous data from the European Space Agency's International Gamma Ray Astrophysics Laboratory, or INTEGRAL, satellite.

"Naturally it is difficult to find something we know is hiding well and which has eluded detection so far," said Volker Beckmann of Goddard and the University of Maryland, Baltimore County, lead author on a report in an upcoming issue of The Astrophysical Journal. "INTEGRAL is a telescope that should see nearby hidden black holes, but we have come up short."

The X-ray sky is thousands to millions of times more energetic than the visible sky familiar to our eyes. Much of the X-ray activity is from black holes violently sucking in gas from their surroundings. 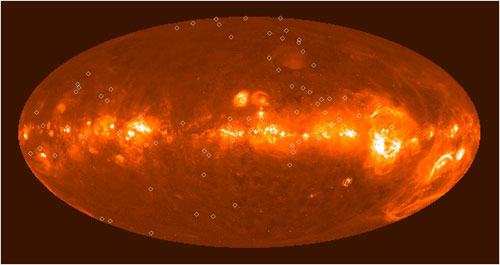 Image above: This all-sky map shows regions of ionized hydrogen gas in the local universe. The hidden black holes detected in the INTEGRAL survey of high-energy X-ray sources are located within the diamond-shape marks. Many sources were detected through the line of sight of the dusty Milky Way galactic plane, which is the bright area stretching across the center of the entire image from left to right. Click image to enlarge. Credit: D. Finkbeiner (hydrogen) / ESA, INTEGRAL, V. Beckmann, NASA-GSFC (gamma ray)

Recent breakthroughs in X-ray astronomy, including a thorough black hole census with NASA's Chandra X-ray Observatory and Rossi X-ray Timing Explorer, have all dealt with lower-energy X-rays. The energy range is roughly 2,000 to 20,000 electron-volts. Optical light, in comparison, is about 2 electron volts.

The INTEGRAL survey is the first of its kind to glimpse into the largely unexplored higher-energy, or "hard," X-ray regime of 20,000 to 40,000 electron-volts.

"The X-ray background, this pervasive blanket of X-ray light we see everywhere in the universe, peaks at about 30,000 electron volts, yet we really know next to nothing about what produces this radiation," said co-author Neil Gehrels of Goddard.

The theory is that hidden black holes, which scientists call Compton-thick objects, are responsible for the peak at 30,000 electron volts. These X-rays are so energetic that they would penetrate even the most dust-enshrouded black holes yet remain beyond the range of powerful lower-energy X-ray observatories such as Chandra.

High-energy light in general is harder to focus than optical and lower-energy (longer-wavelength) forms of light. As a result, INTEGRAL doesn't have the resolution to make sharp images like Chandra and Hubble can.

"Basically, the higher you go in energy, the harder it is to detect faint sources," said Chris Shrader of Goddard, another co-author. "This is why no hard X-ray mission has been able to study many individual objects in the distant universe. That would require a next-generation telescope. But INTEGRAL is now the first to resolve the local universe."

This implies that if hidden black holes make up the bulk of the X-ray background, they aren't local. Why? One reason could be that, in the modern local universe, these black holes have had time to blow away the gas and dust that once enshrouded them, leaving them unobscured. This liberation of gas and dust would have its consequences; it would blow away to influence star and galaxy formation elsewhere.

"This is just the tip of the iceberg," Beckmann said. "In a few more months we will have a larger survey completed with the Swift mission. Our goal is to push this kind of observation deeper and deeper into the universe to see black hole activity at early epochs. That's the next great challenge for X-ray and gamma-ray astronomers."

Simona Soldi and Nicolas Produit of the INTEGRAL Science Data Centre near Geneva, Switzerland, also participated in this result.