New NASA-Japanese Telescope Images Uncharted Wavelengths
Scientists using an experimental X-ray telescope suspended from a balloon have captured a unique picture of a pulsar shining in a form of light never before imaged in detail -- that is, in high-energy "hard" X-rays. The observation marks a milestone in astronomical imaging. 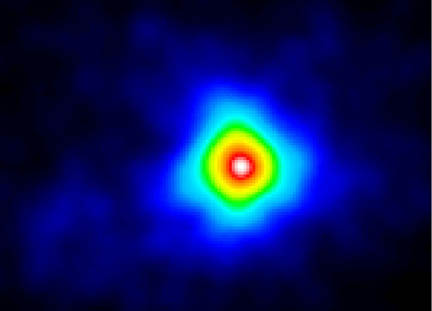 Image above: The first "hard X-ray" image of a celestial object, a pulsar system called 4U 0115+63. This is a false-color image showing X-ray intensity from white (brightest) to blue (faintest). This is a two-star system, in which a pulsar (about 20 miles across) orbits star larger than our Sun. From our distant vantage point, the system appears as a single point. The structure seen here -- glowing in X-rays at the 20-40 kilo-electron-volt energy level, thousands of times more energetic than optical light -- is not visible to optical telescopes. X-rays are generated when gas from the Sun-like star falls towards and onto the pulsar, attracted by the dense pulsars strong gravity. Credit: NASA/Nagoya University. Click here for print-resolution image

"In this new pulsar picture we are seeing aspects no one has seen before," said Dr. Hans Krimm of NASA's Goddard Space Flight Center in Greenbelt, Md., an InFOCuS project scientist. "The X-ray band of the electromagnetic spectrum is huge; and until now, we were only seeing a sliver of this -- sort of like viewing the colors red and orange but not higher-energy blues and violets."

The Chandra telescope does have crisper vision than InFOCuS, he said, but as these new types of mirrors are improved, high-energy X-ray images will get better and better. "Our new image is a little fuzzy, but it sure looks beautiful to us," said Krimm.

InFOCuS launched on September 16 and flew for 20 hours from Fort Sumner, N.M., beneath a 1.1-million-cubic-meter (40-million-cubic-foot) balloon at 39 kilometers (128,000 feet). The pulsar it observed is a well-known target named 4U 0115+63, which is 23,000 light years away in the constellation Cassiopeia. The InFOCuS collaboration includes NASA Goddard and the universities of Nagoya (Japan), Pennsylvania, Arizona and Maryland. 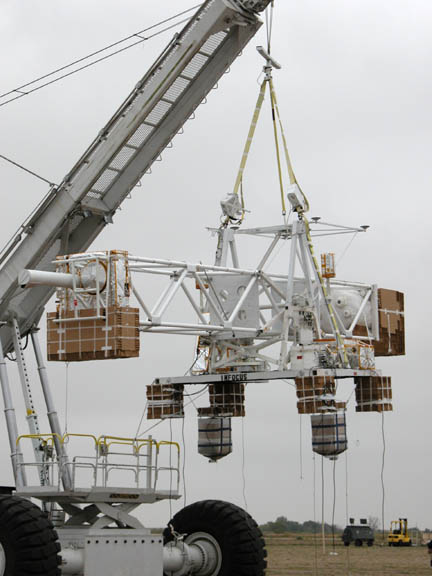 Image above: The 8-meter-long (26-foot) InFOCuS balloon payload prepares for launch in Fort Sumner, New Mexico. InFOCuS is angled between 45 and 80 degrees once airborne. Pictured here, X-rays would enter through the telescope on the "left side" and funnel down 8 meters to the bulbous detection unit. The instrument can hold four telescopes (note four circular openings in the middle of the instrument), but only one telescope was used for this flight. Credit: NASA/Nagoya University. Click here for print-resolution image 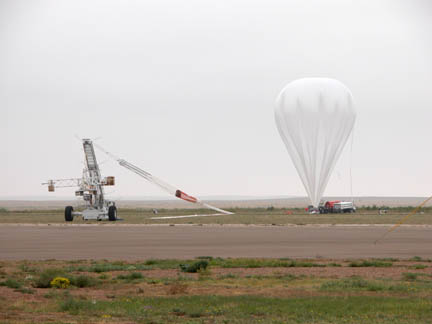 Image above: A balloon inflates and will soon lift InFOCuS, shown here being held aloft of a crane to prevent dragging during lift off. Credit: NASA/Nagoya University. Click here for print-resolution image 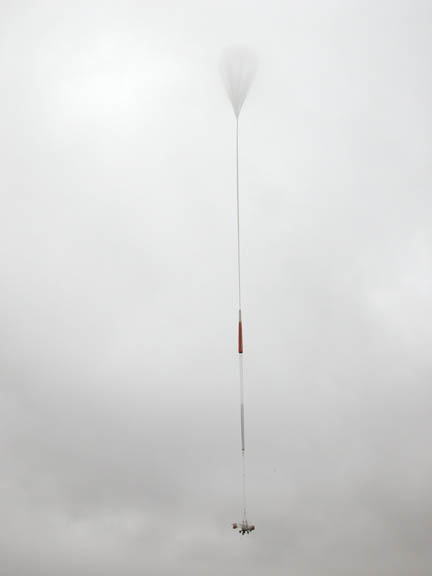 Image above: InFOCuS heads above the clouds. The rope-like white fabric beneath the inflated part of the balloon is actually un-inflated balloon. At a float altitude of 39 kilometers (128,000 feet), the balloon will inflate to 1.1 million cubic meters (40 million cubic feet), large enough to hold several jumbo jets. Credit: NASA/Nagoya University. Click here for print-resolution image

Visible light -- the reds, greens and blues our eyes can detect -- is far easier to reflect and magnify, the basic function of an optical telescope. Shine a flashlight into the mirror, and the light will bounce back. A beam of X-rays would pierce through the mirror. To reflect X-ray light onto a detector, scientists need a telescope with mirrors aligned at shallow angles to the detector. The process is like skimming a stone on water.

Soft X-rays, which are less penetrating than hard X-rays, are easier to focus. Soft X-ray telescopes employ single-layer gold or glass mirrors that reflect the X-rays at very shallow angles onto a CCD, the type of detector found in common video detectors.

InFOCuS team members needed to create a shallower angle and a different kind of detector, or else the hard X-rays would scatter off the mirrors or fly through the detector.

The shallow angle was created with an 8-meter (26-foot) focal length between the mirrors and the detector. The mirrors are multi-layer with alternating, lightweight and excruciatingly thin bands of carbon and platinum. X-rays that penetrate one band of platinum are reflected by lower bands onto the detector. The detector is Cadmium-Zinc-Telluride, a new technology.

Cosmic phenomena both beautiful and bizarre -- such as star explosions and the flow of gas around a black hole -- glow brightly in X-rays. Imaging these events provides insight to their structure and nature.

InFOCuS is one of three major instruments pushing the limits of X-ray imaging. In 2001, the balloon-borne High Energy Replicated Optics (HERO) experiment, built by NASA Marshall Space Flight Center in Huntsville, Ala., produced images from X-ray light more energetic than what Chandra sees but less energetic than what InFOCuS sees. Another balloon-borne experiment led by Caltech -- the High Energy Focusing Telescope (HEFT) -- will attempt to image the highest-energy X-rays, like InFOCuS does.

"These three balloon experiments represent the future of X-ray astronomy," said Dr. Jack Tueller of NASA Goddard, InFOCuS Principal Investigator. "The beauty of balloons is that we can test these cutting-edge technologies for relatively little money. Try to imagine testing a 26-foot-long telescope any other way. We plan to fly InFOCuS several more times in the next few years."

Constellation X, proposed for flight early next decade, would comprise several telescopes flying in unison with the combined light-collecting power needed to observe matter falling into black holes. Constellation X is a key mission in NASA's Beyond Einstein roadmap.

Note on acronym: The "u" of "InFOCuS" is actually the Greek letter "mu" (m), which denotes the prefix "micro". The "mu" symbol might convert to an "m" or "u" in electronic transfer of this press release.