NASA Achieves Breakthrough In Black Hole Simulation
NASA scientists have reached a breakthrough in computer modeling that allows them to simulate what gravitational waves from merging black holes look like. The three-dimensional simulations, the largest astrophysical calculations ever performed on a NASA supercomputer, provide the foundation to explore the universe in an entirely new way.

According to Einstein's math, when two massive black holes merge, all of space jiggles like a bowl of Jell-O as gravitational waves race out from the collision at light speed.

Previous simulations had been plagued by computer crashes. The necessary equations, based on Einstein's theory of general relativity, were far too complex. But scientists at NASA's Goddard Space Flight Center in Greenbelt, Md., have found a method to translate Einstein's math in a way that computers can understand.

Left animation: This visualization shows what Einstein envisioned. Researchers crunched Einstein's theory of general relativity on the Columbia supercomputer at the NASA Ames Research Center to create a three-dimensional simulation of merging black holes. This was the largest astrophysical calculation ever performed on a NASA supercomputer. The simulation provides the foundation to explore the universe in an entirely new way, through the detection of gravitational waves. (7.4 Mb - no audio). Click on image to view animation. Credit:Henze, NASA

"These mergers are by far the most powerful events occurring in the universe, with each one generating more energy than all of the stars in the universe combined. Now we have realistic simulations to guide gravitational wave detectors coming online," said Joan Centrella, head of the Gravitational Astrophysics Laboratory at Goddard.

Similar to ripples on a pond, gravitational waves are ripples in space and time, a four-dimensional concept that Einstein called spacetime. They haven't yet been directly detected.

Gravitational waves hardly interact with matter and thus can penetrate the dust and gas that blocks our view of black holes and other objects. They offer a new window to explore the universe and provide a precise test for Einstein's theory of general relativity. The National Science Foundation's ground-based Laser Interferometer Gravitational-Wave Observatory and the proposed Laser Interferometer Space Antenna, a joint NASA - European Space Agency project, hope to detect these subtle waves, which would alter the shape of a human from head to toe by far less than the width of an atom.

Black hole mergers produce copious gravitational waves, sometimes for years, as the black holes approach each other and collide. Black holes are regions where gravity is so extreme that nothing, not even light, can escape their pull. They alter spacetime. Therein lies the difficulty in creating black hole models: space and time shift, density becomes infinite and time can come to a standstill. Such variables cause computer simulations to crash. 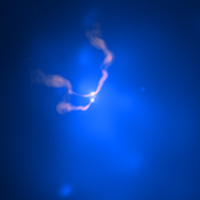 These massive, colliding objects produce gravitational waves of differing wavelengths and strengths, depending on the masses involved. The Goddard team has perfected the simulation of merging, equal-mass, non-spinning black holes starting at various positions corresponding to the last two to five orbits before their merger.

With each simulation run, regardless of the starting point, the black holes orbited stably and produced identical waveforms during the collision and its aftermath. This unprecedented combination of stability and reproducibility assured the scientists that the simulations were true to Einstein's equations. The team has since moved on to simulating mergers of non-equal-mass black holes.

Einstein's theory of general relativity employs a type of mathematics called tensor calculus, which cannot be turned into computer instructions easily. The equations need to be translated, which greatly expands them. The simplest tensor calculus equations require thousands of lines of computer code. The expansions, called formulations, can be written in many ways. Through mathematical intuition, the Goddard team found the appropriate formulations that led to suitable simulations.

Progress also has been made independently by several groups, including researchers at the Center for Gravitational Wave Astronomy at the University of Texas, Brownsville, which is supported by the NASA Minority University Research and Education Program.

+ Click here for more details and visuals
› Back To Top