Explosions in Space May Have Initiated Ancient Extinction on Earth
Scientists at NASA and the University of Kansas say that a mass extinction on Earth hundreds of millions of years ago could have been triggered by a star explosion called a gamma-ray burst. The scientists do not have direct evidence that such a burst activated the ancient extinction. The strength of their work is their atmospheric modeling -- essentially a "what if" scenario.

The scientists calculated that gamma-ray radiation from a relatively nearby star explosion, hitting the Earth for only ten seconds, could deplete up to half of the atmosphere's protective ozone layer. Recovery could take at least five years. With the ozone layer damaged, ultraviolet radiation from the Sun could kill much of the life on land and near the surface of oceans and lakes, and disrupt the food chain. 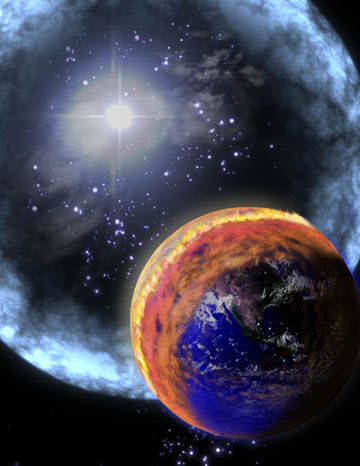 Image above: Scientists say that a ten-second burst of gamma rays from a massive star explosion within 6,000 light years from Earth could have triggered a mass extinction hundreds of millions of years ago. In this artist's conception we see the gamma rays hitting the Earth's atmosphere. (The expanding shell is pictured as blue, but gamma rays are actually invisible.) The gamma rays initiate changes in the atmosphere that deplete ozone and create a brown smog of NO2.

With the ozone layer damaged for up to five years, harmful ultraviolet radiation from the Sun would kill smaller life-forms and disrupt the food chain. Scientists say that a gamma-ray burst might have caused the Ordovician extinction 450 million years ago, some 200 million years before dinosaurs. Image Credit: NASA Click here for a 20 meg print-resolution version of this image

Gamma-ray bursts in our Milky Way galaxy are indeed rare, but the scientists estimate that at least one nearby likely hit the Earth in the past billion years. Life on Earth is thought to have appeared at least 3.5 billion years ago. This research, supported by a NASA Astrobiology grant, represents a thorough analysis of the "mass extinction" hypothesis first announced by members of this science team in September 2003.

"A gamma-ray burst originating within 6,000 light years from Earth would have a devastating effect on life," said Dr. Adrian Melott of the Department of Physics and Astronomy at the University of Kansas. "We don't know exactly when one came, but we're rather sure it did come -- and left its mark. What's most surprising is that just a 10-second burst can cause years of devastating ozone damage." 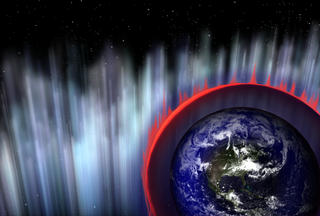 Image/animation above: Gamma-ray bursts are the most powerful explosions known in the Universe, and most originate in distant galaxies. A large percentage of bursts likely arise from the explosion of stars over 15 times more massive than our Sun. Scientists say burst from a nearby star could cause severe damage to the Earth’s protective ozone layer. In this artists conception we see the gamma rays hitting the Earth's atmosphere. (The expanding shell is pictured as blue, but gamma rays are actually invisible.) Click on image to view animation. Credit: NASA Click here for a 17 meg print-resolution version of this image

A scientific paper describing this finding appears in Astrophysical Journal Letters. The lead author is Brian Thomas, a Ph.D. candidate at University of Kansas whom Melott advises.

Gamma-ray bursts are the most powerful explosions known. Most originate in distant galaxies, and a large percentage likely arise from explosions of stars over 15 times more massive than our Sun. A burst creates two oppositely-directed beams of gamma rays that race off into space.

Thomas says that a gamma-ray burst may have caused the Ordovician extinction 450 million years ago, killing 60 percent of all marine invertebrates. Life was largely confined to the sea, although there is evidence of primitive land plants during this period.

In the new work, the team used detailed computer models to calculate the effects of a nearby gamma-ray burst on the atmosphere and the consequences for life.

Thomas, with Dr. Charles Jackman of NASA's Goddard Space Flight Center in Greenbelt, Md., calculated the effect of a nearby gamma-ray burst on the Earth's atmosphere. Gamma rays, a high-energy form of light, can break molecular nitrogen (N2) into nitrogen atoms, which react with molecular oxygen (O2) to form nitric oxide (NO). NO will destroy ozone (O3) and produce nitrogen dioxide (NO2). NO2 will then react with atomic oxygen to reform NO. More NO means more ozone destruction. Computer models show that up to half the ozone layer is destroyed within weeks. Five years on, at least 10 percent is still destroyed.

Next Thomas and fellow student Daniel Hogan, an undergraduate, calculated the effect of ultraviolet radiation on life. Deep-sea creatures living several feet below water would be protected. Surface-dwelling plankton and other life near the surface, however, would not survive. Plankton is the foundation of the marine food chain. 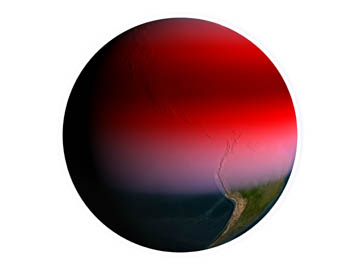 Image/animation above: This simulation depicts the regions of the planet most susceptible to DNA damage (shown in red) if a large gamma ray burst were to occur close to Earth. Though there is no direct evidence, scientists say a nearby gamma-ray burst may have caused the great extinction of the late Ordovician period 450 million years ago, which killed 60 percent of all marine invertebrates. Credit: NASA/U. of Kansas Click here for a 2 meg print-resolution version of this image

"One unknown variable is the rate of local gamma-ray bursts," said Thomas. "The bursts we detect today originated far away billions of years ago, before the Earth formed. Among the billions of stars in our Galaxy, there's a good chance that a massive one relatively nearby exploded and sent gamma rays our way." The Swift mission, launched in November 2004, will help determine recent burst rates. Other team members are Dr. Claude Laird of the University of Kansas, and Drs. Richard Stolarski, John Cannizzo, and Neil Gehrels of NASA Goddard.

Image/animation above: Swift is a first-of-its-kind multi-wavelength observatory dedicated to the study of gamma ray burst (GRB) science. Its three instruments will work together to observe GRBs and afterglows in the gamma ray, X-ray, ultraviolet, and optical wavebands. Swift is designed to solve the 35-year-old mystery of the origin of gamma-ray bursts. Scientists believe GRB are the birth cries of black holes. Click on image to view animation (no audio). Credit: NASA Click here for a 500 K print-resolution version of this image