NASA Galaxy Hunter: Huge Black Holes Stifle Star Formation
Supermassive black holes in some giant galaxies create such a hostile environment, they shut down the formation of new stars, according to NASA Galaxy Evolution Explorer findings published in the August 24 issue of Nature.

The orbiting observatory surveyed more than 800 nearby elliptical galaxies of various sizes. An intriguing pattern emerged: the more massive, or bigger, the galaxy, the less likely it was to have young stars. Because bigger galaxies are known to have bigger black holes, astronomers believe the black holes are responsible for the lack of youthful stars. 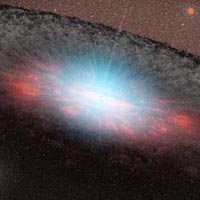 Image right: This artist's concept depicts a supermassive black hole at the center of a galaxy. The blue color here represents radiation pouring out from material very close to the black hole. The grayish structure surrounding the black hole, called a torus, is made up of gas and dust. Image credit: NASA/JPL-Caltech
+ Full image and caption
+ Browse version of image

"Supermassive black holes in these giant galaxies create unfriendly places for stars to form," said Dr. Sukyoung K. Yi of Yonsei University in Seoul, Korea, who led the research team. "If you want to find lots of young stars, look to the smaller galaxies."

Previously, scientists had predicted that black holes might have dire consequences for star birth, but they didn't have the tools necessary to test the theory. The Galaxy Evolution Explorer, launched in 2003, is well-suited for this research. It is extremely sensitive to the ultraviolet radiation emitted by even low numbers of young stars.

Black holes are monstrous heaps of dense matter at the centers of galaxies. Over time, a black hole and its host galaxy will grow in size, but not always at the same rate.

Yi and his collaborators found evidence that the black holes in elliptical galaxies bulk up to a critical mass before putting a stop to star formation. In other words, once a black hole reaches a certain size relative to its host galaxy, its harsh effects become too great for new stars to form. According to this "feedback" theory, the growth of a black hole slows the development of not only stars but of its entire galaxy.

How does a black hole do this? There are two possibilities. First, jets being blasted out of black holes could blow potential star-making fuel, or gas, out of the galaxy center, where stars tend to arise. 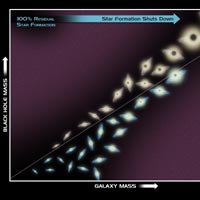 The second theory relates to the fact that black holes drag surrounding gas onto them, which heats the gas. The gas becomes so hot that it can no longer clump together and collapse into stars.

Additional information about Galaxy Evolution Explorer is online at http://www.galex.caltech.edu .

The California Institute of Technology in Pasadena, Calif., leads the Galaxy Evolution Explorer mission and is responsible for science operations and data analysis. NASA's Jet Propulsion Laboratory, also in Pasadena, manages the mission and built the science instrument. The mission was developed under NASA's Explorers Program managed by the Goddard Space Flight Center, Greenbelt, Md. Researchers from South Korea and France collaborated on this mission.