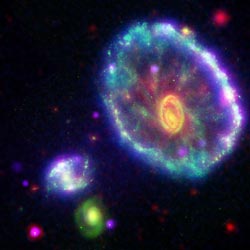 Image right: This false-color composite image shows the Cartwheel galaxy. Although astronomers have not identified exactly which galaxy collided with the Cartwheel, two of three candidate galaxies can be seen in this image to the bottom left of the ring, one as a neon blob and the other as a green spiral. Image credit: NASA/JPL-Caltech
+ Full image and caption
+ Browse image

"The dramatic plunge has left the Cartwheel galaxy with a crisp, bright ring around a zone of relative calm," said astronomer Phil Appleton of the California Institute of Technology, Pasadena, Calif. "Usually a galaxy is brighter toward the center, but the ultraviolet view indicates the collision actually smoothed out the interior of the galaxy, concentrating older stars and dust into the inner regions. It's like the calm after the storm of star formation." The outer ring, which is bigger than the entire Milky Way galaxy, appears blue and violet in the image.

Recently-observed features include concentric rings rippling out from the impact area in a series of star formation waves, ending in the outermost ring. "It's like dropping a stone into a pond, only in this case, the pond is the galaxy, and the wave is the compression of gas," said Appleton. "Each wave represents a burst of star formation, with the youngest stars found in the outer ring."

Previously, scientists believed the ring marked the outermost edge of the galaxy, but the latest Galaxy Evolution Explorer observations detect a faint disk, not visible in this image, that extends to twice the diameter of the ring. This means the Cartwheel is a monstrous 2.5 times the size of the Milky Way.

Most galaxies have only one or two bright X-ray sources, usually associated with gas falling onto a black hole from a companion star. The Cartwheel has a dozen. Appleton said that makes sense, because black holes thrive in areas where massive stars are forming and dying fast.

The Cartwheel galaxy is one of the brightest ultraviolet energy sources in the local universe. In some visible-light images, it appears to have spokes. Appleton is presenting his finding today at the 207th meeting of the American Astronomical Society in Washington. His research collaborators included Armando Gil de Paz of Universidad Complutense, Madrid, Spain; and Barry Madore of The Observatories of the Carnegie Institution of Washington, Pasadena, Calif. The team's observations were a follow-up to studies made by the Galaxy Evolution Explorer science team's Nearby Galaxy Survey.

Additional information about Galaxy Evolution Explorer is online at http://www.galex.caltech.edu .