Aging Universe May Still Be Spawning Massive Galaxies
NASA's Galaxy Evolution Explorer has spotted what appear to be massive "baby" galaxies in our corner of the universe. Previously, astronomers thought the universe's birth rate had dramatically declined and only small galaxies were forming. 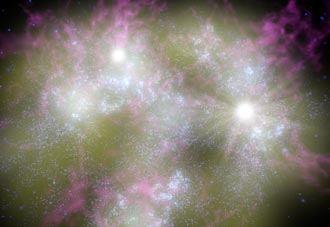 Image right: This animation shows a typical young galaxy, teeming with hot, newborn stars and exploding supernovas. The supernovas are seen as white flashes of light. Click for animation.

"We knew there were really massive young galaxies eons ago, but we thought they had all matured into older ones more like our Milky Way. If these galaxies are indeed newly formed, then this implies parts of the universe are still hotbeds of galaxy birth," said Dr. Chris Martin. He is principal investigator for the Galaxy Evolution Explorer at the California Institute of Technology, Pasadena, Calif., and co-author of the study.

Martin and colleagues, led by Dr. Tim Heckman of Johns Hopkins University, Baltimore, Md., unearthed three-dozen bright, compact galaxies that greatly resemble the youthful galaxies of more than 10 billions years ago. These new galaxies are relatively close to us, ranging from two to four billion light-years away. They may be as young as 100 million to one billion years old. The Milky Way is approximately 10 billion years old. 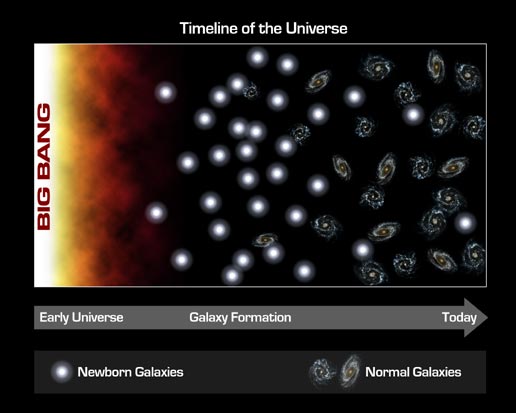 Image above: This artist's conception illustrates the decline in our universe's "birth-rate" over time. When the universe was young, massive galaxies were forming regularly, like baby bees in a bustling hive. In time, the universe bore fewer and fewer "offspring," and newborn galaxies (white circles) matured into older ones more like our own Milky Way (spirals). Click for full caption.

The recent discovery suggests our aging universe is still alive with youth. It also offers astronomers their first, close-up glimpse at what our galaxy probably looked like when it was in its infancy.

"Now we can study the ancestors to galaxies much like our Milky Way in much more detail than ever before," Heckman said. "It's like finding a living fossil in your own backyard. We thought this type of galaxy had gone extinct, but in fact newborn galaxies are alive and well in the universe," he added.

The new discoveries are of a type called ultraviolet luminous galaxies. They were discovered after the Galaxy Evolution Explorer scanned a large portion of the sky with its highly sensitive ultraviolet light detectors. Since young stars pack most of their light into ultraviolet wavelengths, young galaxies appear to the spacecraft like diamonds in a field of stones. Astronomers mined for these rare gems before, but missed them because they weren't able to examine a large enough slice of the sky.

"The Galaxy Evolution Explorer surveyed thousands of galaxies before finding these few dozen ultraviolet-bright ones," said Dr. Michael Rich, a co-author of the study from the University of California, Los Angeles.

The newfound galaxies are about 10 times as bright in ultraviolet wavelengths as the Milky Way. This indicates they are teeming with violent star-forming regions and exploding supernova, which are characteristics of youth.

When our universe was young, massive galaxies were regularly bursting into existence. Over time, the universe bore fewer and fewer galactic progeny, and its newborn galaxies grew up into ones that look like our own. Until now, astronomers thought they had seen the last of these giant babies.

The results will be published in an upcoming special issue of Astrophysical Journal Letters, along with several other papers describing new results from the Galaxy Evolution Explorer.

The Galaxy Evolution Explorer was launched on April 28, 2003. Its mission is to study the shape, brightness, size and distance of galaxies across 10 billion years of cosmic history. The Explorer's 50-centimeter-diameter (19.7-inch) telescope sweeps the skies in search of ultraviolet-light sources.

Caltech leads the Galaxy Evolution Explorer mission and is responsible for science operations and data analysis. NASA's Jet Propulsion Laboratory, Pasadena, Calif., manages the mission and built the science instrument. The mission was developed under NASA's Explorers Program managed by the Goddard Space Flight Center, Greenbelt, Md. South Korea and France are the international partners in the mission.