NASA FUSE Satellite Solves the Case of the Missing Deuterium

Image Above: This is a false-color image of the star AE Aurigae (bright source of light slightly off center of image) embedded in a region of space containing smoke-like filaments of carbon-rich dust grains, a common phenomenon. Such dust might be hiding deuterium, an isotope of hydrogen, and stymieing astronomers' efforts to study star and galaxy formation. The FUSE satellite has surveyed the local deuterium concentration in the galaxy and found far more than expected. Because deuterium is a tracer of star and galaxy evolution, this discovery could radically alter theories about how stars and galaxy form. Credit: T.A. Rector and B.A. Wolpa, NOAO, AURA, and NSF. (Download Image: + Larger Version | + High Resolution Version)

The answer "is as unsettling as it is exciting," says the science team leader because this finding could radically alter theories about star and galaxy formation.

Deuterium, which contains one proton and one neutron, was created a few minutes after the Big Bang. Its presence today in the local universe serves as a tracer for star creation and galaxy building throughout the eons. This is because any deuterium used in stars is forever destroyed. Nearly all the deuterium seen today is "pure," having never been burned by stars. Knowing how much deuterium was created in the Big Bang and how much still exists today allows scientists to estimate how much gas has been used to create stars.

Deuterium emits a telltale spectral fingerprint in the ultraviolet energy range. But for the last 35 years, there's been a problem with this straightforward measurement. 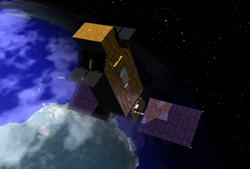 Image right:FUSE studies primordial chemical relics of the Big Bang, from which all the stars, planets and life evolved. FUSE was launched aboard a Boeing Delta II rocket, and lifted off from Cape Canaveral Air Station, Florida on June 24, 1999. Credit: NASA (Download Image: + Larger Version)

"Since the 1970s we have been unable to explain why deuterium levels vary all over the place," said team leader Jeffrey Linsky of JILA, a joint institute of the University of Colorado, Boulder, and the National Institute of Standards and Technology.

In the 1970s, NASA's Copernicus satellite found deuterium distribution in the Milky Way galaxy to be patchy. There was more in one direction and, inexplicably, far less in other directions. Early FUSE observations confirmed this, a perplexing result because deuterium should be evenly mixed and as readily available as other elements for the creation of new stars.

In 2003, Bruce Draine of Princeton University, a tem member on the new result, developed computer models that showed how deuterium, compared to hydrogen, might preferentially bind to interstellar dust grains, changing from an easily detectable gaseous form to an unobservable solid form. The new FUSE data strongly support this theory.

In regions that remain undisturbed for long periods, such as the "local bubble" around our sun a few hundred light-years across, deuterium atoms systematically leave the gas phase and replace normal hydrogen atoms in dust grains. FUSE cannot detect this non-gaseous form, which explains the low detection level of 15 parts per million hydrogen atoms in our neighborhood and values as low as 5 parts per million elsewhere. When a region is disturbed by a supernova or hot stars, dust grains are vaporized, releasing deuterium atoms back into a gas phase. FUSE detects high deuterium levels in such regions. 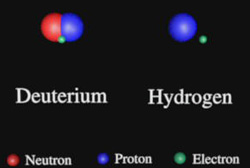 Image left:This animation depicts the difference between normal hydrogen and "heavy hydrogen," or deuterium. Deuterium is not a separate element, but rather an isotope of hydrogen. Observing the spectral fingerprint of deuterium is one of the key science goals of the FUSE mission. Credit: NASA & JHU.Click on image to play animation.

Primordial deuterium concentrations are about 27 parts per million hydrogen atoms. Various non-FUSE studies have made these estimates, and they all jibe rather well. Most recently NASA's Wilkinson Microwave Anisotropy Probe confirmed this approximation.

FUSE finds concentrations as high as 23 parts per million in our galaxy. Scientists had assumed, based on theory, that at least a third of the local deuterium would have been destroyed over time. The more gas that cycles through stars, the lower the amount of deuterium that survives, so the local (modern) universe would have less deuterium than the distant (early) universe. But only about 15 percent of the deuterium has been destroyed, FUSE has found.

"The peak galactic detection levels are likely close to the real total deuterium abundance in the Milky Way, with the rest of it in hiding, not destroyed," said Warren Moos of Johns Hopkins University in Baltimore, FUSE Principal Investigator and co-author on the report in the August 20 issue of The Astrophysical Journal.

If the peak levels are 23 parts per million, this implies that either significantly less material has been converted to helium and heavier elements in stars or that much more primordial gas has rained down onto our galaxy over its lifetime than had been thought. In either case, our models of the chemical evolution of the Milky Way galaxy will have to be revised significantly to explain this new result, said George Sonneborn of NASA Goddard Space Flight Center in Greenbelt, Md., co-author and mission project scientist.

FUSE is a sensitive probe of how much gas has entered into galaxies and has been processed in stars. So theories, as is always the case, must match observations and not the other way around.