Earth: The Lone Pale Blue Dot?
A recent photo from the Cassini spacecraft shows the mighty planet Saturn, and if you look very closely between its wing-like rings, a faint pinprick of light. That tiny dot is Earth bustling with life as we know it. The image is the second ever taken of our world from deep space. The first, captured by the Voyager spacecraft in 1990, stunned many people, including the famous astronomer Carl Sagan who called our seemingly miniscule planet a "pale blue dot" and "the only home we've ever known." 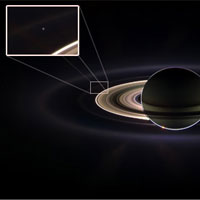 Last September, a portion of Cassini's picture showing Earth was unveiled to an auditorium full of scientists attending the third Pale Blue Dot workshop at the Adler Planetarium in Chicago. The workshop brought together scientists from across the country and beyond to talk about how to find life elsewhere in our universe, a central theme in the interdisciplinary field of astrobiology. When the workshop participants were presented with the picture, they spontaneously began to clap. One of their fundamental goals is to capture a portrait like Cassini's showing another "pale blue dot" like Earth in a planetary system beyond our own.

If scientists do ever acquire such a photo, how will they figure out whether anybody is home? Workshop participant Dr. Wes Traub of NASA's Jet Propulsion Laboratory in Pasadena says a photo of a light-blue extrasolar planet - a planet outside our solar system - might indicate the planet has an atmosphere, a tantalizing sign that it could support life. "In our solar system, we are the only small light-blue planet," he said. Earth appears blue because its atmosphere scatters blue light around, literally filling the sky with the color blue.

But colors are only clues. A planet with an atmosphere might be blue, or not. Mars has an atmosphere, albeit a thin one, and it's red. The blue light in the martian skies is soaked up by iron-containing molecules on the surface that radiate red.

Ultimately, astrobiologists will need additional data to determine whether an extrasolar planet is habitable, and if so, whether it harbors life. Future planet-finding missions like NASA's Terrestrial Planet Finder are expected to return both valuable "spectral" data and imagery of planets looking small enough to fit on a pin. Spectra are surveys of an object's rainbow-like array of different wavelengths of light. They reveal the presence of specific molecules.

To determine if a planet is livable, scientists will look for carbon dioxide and water vapor, signposts that a planet has an atmosphere and oceans, respectively. Atmospheres not only provide air to breathe, but also act like blankets to keep a planet warm and help buffer potential residents from damaging ultraviolet and cosmic rays. Oceans help regulate a planet's temperature and provide liquid water, an essential ingredient for life on Earth.

Other molecules enveloping a planet, such as oxygen, ozone and methane, can suggest that life itself has taken root. On Earth, oxygen is "breathed out" by plants, and methane by micro-creatures living in swamps and animals. These chemicals don't stick around for long on their own, so if they are hanging around an extrasolar planet, then something must be pumping the stuff out. That something could be life, but this isn't always the case. Saturn's moon's Titan is shrouded in an atmosphere containing lots of methane not produced by life.

Scientists say that oxygen is a more reliable sign of life than methane, but if they found large quantities of both, they'd be more convinced. "Finding two of these molecules together would be much better than one. The more, the better," said Dr. Victoria Meadows of NASA's Spitzer Science Center, Pasadena, who served as chair of the third Pale Blue Dot conference. "For example, if we found carbon dioxide, oxygen and water vapor, in addition to methane, then we'd be pretty convinced that we were looking at an environment like our own." 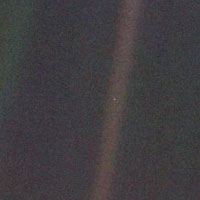 Image left: A view of Earth from Voyager 1, at a distance of more than 4 billion miles. Earth is the dot in the middle of the bright streak. Image credit: NASA/JPL
+ Full image and caption
+ Browse version of image

Not all molecules are a good sign. For example, abundant amounts of sulfur dioxide suggest a dead, dry planet. This chemical would dissolve into a planet's ocean if it had one, so its presence means it is unlikely there's much water around. Venus is one such parched planet, with a thick atmosphere containing sulfur and carbon dioxide.

There are still other signs of life that astrobiologists will seek out. At the workshop, scientists talked about looking for pigments from planets coated in slime, as the young Earth might have been, and the systematic search for technological signs of civilizations. They discussed observing global changes in a planet over time - a mark of weather, continents and possibly life. And they talked about the colors of vegetation, especially the infrared light that plants shine in brilliantly.

When it comes to exotic planets, scientists say that we should be prepared for the unexpected. "One of the messages to come out of the workshop is that planets are a complicated result of what they are made of, and their histories. Planets are potentially as diverse as people," said Meadows. "In only the last few years, we've found evidence that extrasolar planets may not be anything like those in our solar system. That's what's so exciting. Not just the possibility of finding another planet like the Earth, but the chance to also look for truly alien worlds."