A Matter of Fact 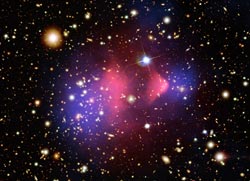 As a rule, scientists seek certainty. So it's rather unusual that for more than 70 years, many astronomers have wagered the universe is primarily made of dark matter -- a mysterious and unproven substance.

It's a bet that finally paid off, because a team of scientists working with NASA's Chandra X-ray Observatory has found direct evidence that dark matter is as real as the rings around Saturn.

The discovery cements dark matter's status as the biggest building block in the universe, while also putting to rest the nagging worries of many astronomers that they gambled wrong.

Dark matter's murky nature has always sat a bit uneasily with astronomers. "It is uncomfortable for a scientist to have to invoke something invisible and undetectable to account for 90 percent of the matter in the universe," said Maxim Markevitch, a Chandra astrophysicist and researcher with the study.

One of the main arguments for the existence of dark matter involves galaxies and their clusters. Galaxies whip through space at enormous speeds and are searing with hot clouds of gas. Speed and heat of galaxies should cause them to fly apart, but they don't. A leading explanation for this is that the gas and stars are held together by the gravity of dark matter. Belief in dark matter is widespread across the scientific community, but astronomers don't know what it's made of. Still, they believe it acts like it has mass and exerts gravity, yet is invisible and can't bump, touch or crash into anything.

Like determining the origin of the universe or how black holes work, dark matter is one of the holy grails of astronomy. "Little is known about it; all that the numerous searches for dark matter particles have done is rule out various hypotheses, but there have never been any 'positive' results," said Markevitch.

Doug Clowe, leader of the study, set out to see if believing in dark matter was wishful thinking or informed faith. "A universe that's dominated by dark stuff seems preposterous, so we wanted to test whether there were any basic flaws in our thinking," said Clowe. 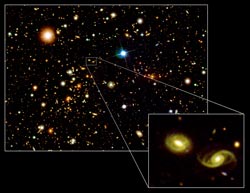 What's the Matter?
Clowe and astronomers with Chandra, the Hubble Space Telescope, the European Southern Observatory's Very Large Telescope and the Magellan telescopes all set their sights on a galaxy cluster nicknamed the "Bullet Cluster." The cluster was an exciting target because of its unique distribution of gas clouds and stars and potential for harboring dark matter.

Image to left: The Bullet Cluster is made of two colliding groups of galaxies. Image Credit: NASA/STScI + View High-res Image

The amount of matter, or "mass," in a galaxy is made up mostly of the gas that surrounds it. Stars, planets, moons and other objects count too, but a majority of the mass still comes from the hot, glowing clouds of hydrogen and other gases.

When the Bullet Cluster's galaxies crossed and merged together, their stars easily continued on their way unscathed. This may seem a bit perplexing, because the bright light of stars makes them appear enormous and crowded together. It would be easy to expect them to smash into each other during their cosmic commute. But the truth is, stars are actually spaced widely apart and pass harmlessly like ships on an ocean.

The gas clouds from the merging galaxies, however, found the going much tougher. As the clouds ran together, the rubbing and bumping of their gas molecules caused friction to develop. The friction slowed the clouds down, while the stars they contained kept right on moving. Before long, the galaxies slipped out of the gas clouds and into clear space. 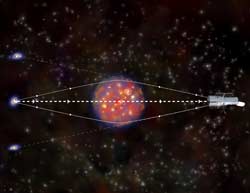 Dark Matter Weighs In
When the stars separated from the clouds, they gave astronomers a lucky chance to estimate their total mass and gravity without the hot gas. The astronomers used their telescopes and various methods to measure the mass of the galaxies.

Dark matter revealed itself when the team tried a technique called "gravitational lensing." This neat trick was inspired by Albert Einstein's prediction that stars and galaxies of high mass can bend light toward them from other sources. The amount of extra light can be calculated and tells astronomers about the size of the galaxy.

An odd thing happened in this case: the galaxies lit up far too much for their size.

Hidden Influence
The scientists had already calculated the masses of the galaxies using other measuring methods. Yet the results from gravitational lensing showed the galaxies are bending much more light toward themselves than they should be able to. The astronomers knew something was amiss. An unseen force, substance or object had escaped the clouds along with the galaxies and was helping to bend more light.

For the first time in history, astronomers caught dark matter at work.

So there it is, bright as starlight: Dark mattermatters, as a matter of fact.