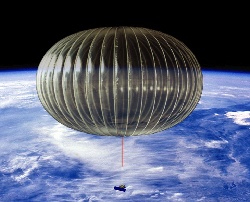 Flying near the edge of space, a NASA scientific balloon broke the flight record for duration and distance. It soared for nearly 42 days, making three orbits around the South Pole.

The record-breaking balloon, almost as large as one and one half football fields, carried the Cosmic Ray Energetics And Mass (CREAM) experiment. CREAM is designed to explore the supernova acceleration limit of cosmic rays, the relativistic gas of protons, electrons and heavy nuclei arriving at Earth from outside the solar system.

In addition to gathering scientific data, the flight was a demonstration of the capabilities of the NASA Ultra-Long Duration Balloon (ULDB) support system. The ULDB is being developed to extend flights up to 100 days.

The pilot-less, helium-filled scientific balloon was launched from the National Science Foundation's McMurdo Station, Antarctica on Dec. 16, 2004. The balloon traveled 41 days and 22 hours. It landed on January 27, 660 kilometers (410 miles) from McMurdo Station. Payload recovery operations are in progress. 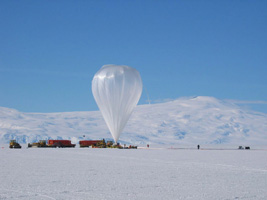 The previous endurance record for a balloon flight was in December 2001 from McMurdo. The flight orbited the South Pole twice over 31 days, 20 hours. The CREAM mission extended the continuous science observation time over previous balloon missions.

The previous endurance record for a long duration balloon flight was in December 2001 from McMurdo. The flight was for two orbits of the South Pole that lasted 31 days, 20 hours. The CREAM mission was able to extend the amount of continuous science observational time over any previous balloon mission. 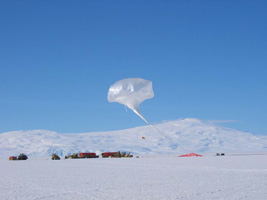 "We are excited with the duration of this flight, which allowed scientists to get ample data to perform their studies," said David Pierce, Chief of the Balloon Program Office at NASA's Goddard Space Flight Center's Wallops Flight Facility, Wallops Island, Va. "We routinely have long duration balloons that float for up to two weeks, but to have one flight last more than 41 days is very rewarding," he added.

Scientific balloons are made of thin polyethylene material, about the same thickness as ordinary sandwich wrap. An enormous balloon was needed to hoist the two-ton CREAM experiment to about 38,100 meters (125,000 feet). NASA's balloon expanded to a diameter of more than 137 meters (450 feet) and weighed 1,839 kilograms, (4,055 pounds). 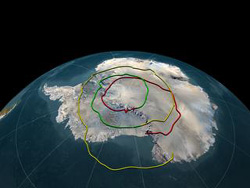 Personnel from the National Scientific Balloon Facility, Palestine, Texas, who support approximately 25 NASA balloon flights annually from sites worldwide, conducted the launch, flight, and recovery operations of the CREAM balloon mission. "We are really proud of our crew in Antarctica," said Danny Ball, Site Manager of the Texas facility. "Everyone at NSBF has contributed to this success, but the crew that spent Thanksgiving, Christmas, and New Years on the “ice” deserves the most of the credit for a great mission and yet another record flight."

"Balloon-borne detectors, flying at the top of the atmosphere, can identify incoming particles before they are broken up in collisions with air nuclei," said Eun Suk Seo, the Principal Investigator for CREAM at the University of Maryland, College Park, Md. "The science instrument, support systems, and operation scheme were successfully tested throughout this record breaking flight. We are ready for a ULDB flight," Seo added.

"These state-of-the-art particle detectors were for the most part built in university laboratories by students, young scientists and engineers", said Dr. W. Vernon Jones, Senior Scientist for Suborbital Research at NASA Headquarters. "Hands-on training while conducting frontier research is a major strength of using balloons for research," he said.

Personnel from the National Scientific Balloon Facility (NSBF), Palestine, Texas annually support approximately 25 NASA balloon flights from sites worldwide. They conducted the launch, flight, and recovery operations of the CREAM balloon mission. "We are really proud of our crew in Antarctica," said Danny Ball, Site Manager of the Texas facility. "Everyone at NSBF contributed to this success, but the crew that spent Thanksgiving, Christmas, and New Years on the ice deserves most of the credit for a great mission and yet another record flight," he added.

The CREAM experiment is collaboration among the University of Maryland, the University of Chicago, Penn State University, universities and organizations in Italy, Korea, France and Mexico. Wallops manages NASA's Scientific Balloon Program for the Science Mission Directorate, NASA Headquarters

Information on NASA’s Scientific Balloon Program is available on the Internet at:

For pictures and information on the CREAM mission visit: