For COBE science: Back in the 1990s, Stephen Hawking described the COBE discovery of temperature variations in the afterglow of the big bang as "the most important discovery of the century, if not of all time." It's hard to top that, but NASA is trying! Read more about COBE's successors, observing the big bang afterglow in even greater detail.

For John Mather: Far from resting on his laurels, John Mather rolls up his sleeve each day at NASA Goddard and directs the construction of the James Webb Space Telescope (JWST), the successor to the Hubble mission. He is the senior project scientist for this mission. JWST will be the greatest telescope launched into space. Its infrared cameras will detect the faint light from the first stars and galaxies to form in the universe, over 13 billion years ago. The observatory is also fine-tuned to search for extra-solar planets, dark matter and dark energy. Read more about the JWST Mission scheduled for launch in 2013.

What's Next for Big Bang Science?

Back in the 1990s, Stephen Hawking described the COBE discovery of temperature variations in the afterglow of the Big Bang as "the most important discovery of the century, if not of all time." It's hard to top that, but NASA is trying!

The COBE mission gave rise to many balloon-borne experiments, such as BOOMERanG mission, 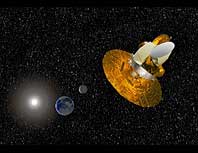 And a NASA mission called the Wilkinson Microwave Anisotropy Probe (WMAP). Each of these experiments zoom in on the temperature variations that COBE discovered. COBE is like the face that launched a thousand ships.


Balloon experiments are important because they are relatively inexpensive to fly and they can utilize the latest technology. Because they are airborne for a maximum of about 40 days per year, however, the amount of data they can collect is limited. The space-based WMAP mission has been in orbit since 2001, collecting remarkable data that very well may lead to another Nobel Prize--or two or three.

The Big Bang's Playing on TV

Several members of the NASA Goddard COBE team work on WMAP. Like COBE, WMAP scans the sky over and over again, soaking up the ancient light from the Big Bang known as the cosmic microwave background. Microwaves are a low-energy form of radiation but higher in energy than radio waves. The cosmic microwave background blankets the universe and is responsible for a sizeable amount of static on your television set--well, before the days of cable. Turn your television to an "in between" channel, and part of the static you'll see is the afterglow of the big bang.

WMAP's first big science announcement came in 2003, and it was a doozy. From studying the temperature variations--a millionth of a degree hotter here, a millionth of a degree cooler there--the WMAP team could deduce fundamental properties of the universe, including its age and shape, the ratio of matter to energy, the era when stars first ignited, and rate at which the universe continues to expand.

The universe is 13.8 billion years old; and the contents of the universe include 4.4% atoms, 22.4% of an unknown type of dark matter, and 73.2% of a mysterious dark energy. + WMAP results

Snapshot of the First Trillionth of a Second

By 2006 WMAP had even more data. The team found evidence to support the concept of inflation, which poses that the universe expanded many trillion times its size faster than a snap of the fingers at the outset of the Big Bang. The first set observations had focused on the temperature differences. The second WMAP result is based on this plus the microwave background's polarization, a breakthrough that enables scientists to analyze what happened less than a trillionth of a trillionth of a second after the Big Bang.

In that crucial split second, changes occurred that allowed for the creation of stars and galaxies many million years later. WMAP has revealed that the first stars--the forebears of all subsequent generations of stars and of life itself--were fully formed remarkably early, only about 400 million years after inflation.

Polarization is affected by the environment through which the light passes, such as the polarized glare of sunlight reflecting off of a shiny object. Although the microwave background emerged many years after the Big Bang, the extent of its polarization points back quite specifically to conditions less than a 10^-30 second into the big bang.

With a richer temperature map and the new polarization map, WMAP data favor the simplest versions of inflation. Generically, inflation posits that, at the outset of the Big Bang, quantum fluctuations--short-lived bursts of energy at the subatomic level--were converted by the rapid inflationary expansion into fluctuations of matter that ultimately enabled stars and galaxies to form. The simplest versions of inflation predict that the largest-sized fluctuations will also be the strongest. The most recent results from WMAP favor this signature.

So What Powered the Big Bang?

There are two types of polarization signals from the microwave background, which scientists call E and B modes. The E mode points to the era of reionization, when the universe, after cooling down for millions of years, became warm again with new stars. These first stars ionized hydrogen atoms, liberating electrons from the protons, which scattered and polarized the big bang afterglow. The new WMAP data indicate that reionization, and thus star formation, occurred 400 million years after the Big Bang, the most accurate assessment to date.

B modes point way back to the inflationary epoch, the calling card of the Big Bang. Inflation attempts to resolve two problems with the Big Bang theory: The universe is flat and uniform. Sure, any space will reach equilibrium given enough time. But the universe was at a uniform temperature at age 380,000 years. Energy would have had to move over 100 times the speed of light to make things that uniform that early. Inflation provides the speed. Inflation also expands the universe quickly enough to flatten out any wrinkles in spacetime that could have been created by gravity or would have caused the nascent universe to implode.

WMAP hasn't seen B modes--yet. The team thinks it can in a few more years; it's just a matter of soaking up enough data. But the temperature map and the E-mode polarization map can make specific statements about inflation, such as an upper limit on its energy.

Hearing the Big Bang Itself

The European Space Agency plans to launch a mission called Planck in 2008 that will study microwave background polarization. WMAP, launched in 2001 yet still going strong, could find B modes before Planck. While Planck is more sensitive, WMAP has a head start. The race is on.

After Planck there's a proposed mission to study inflation in even greater detail; the specifics of the mission will depend on what WMAP and Planck see. One route could be a highly advanced polarization detector. But other ideas might emerge as well.

Theory predicts that we can directly detect the Big Bang, the very moment of the creation of space and time as we know it. This would be a remarkable achievement for humankind, and with dedication this visionary goal can be attain within two decades.

No ordinary telescope will do. Light, or electromagnetic radiation, can only allow us to view the moments after the Big Bang. But the Big Bang made a rumble, a vibration in the fabric of space and time called a gravitational wave that is still ringing today. 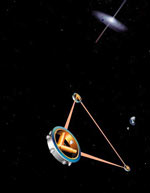 and the space-based LISA mission, proposed for launch next decade, hope to detect gravitational radiation from objects in the universe, such as black holes. These waves were predicted by Einstein but haven't been detected directly yet. There is overwhelming indirect evidence for their existence, though.

The "Big Bang observer" would build upon LISA; this would be an ultra-sensitive detector tuned to the low, faint frequency of that primordial Big Bang gravitational wave. This is the Holy Grail of cosmology, to witness the birth of the universe.

So as you can see, COBE was just the beginning of great science to come.