Clues to Black Hole Growth Beginning to Add Up 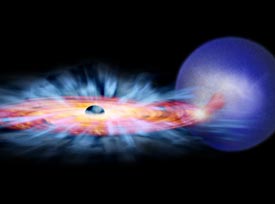 Up to one quarter of the light brightening the universe comes from the massive crush of matter succumbing to the extreme gravity of black holes. Scientists have long understood that amount of light means black holes have the colossal appetite to ingest whole stars and huge amounts of gas. But a critical question has always remained: how they can continue to devour so much?

Image to right: Black holes grow by drawing gas from nearby objects such as stars into an accretion disk. Credit: NASA/CXC/M.Weiss
+ View Larger Image

For the first time, a team of scientists with NASA's Chandra X-ray Observatory led by Jon Miller has uncovered the answer. It's based on the notion that what comes in, must go out.

The In and Out of It

Black holes swell by attracting matter from stars and other nearby objects in a snowballing process called "accretion." The sticky wicket is that generally everything in space is to some degree spinning away from the black hole. The hole's gravity may be strong enough to start peeling off, say, gas from a close star, but the gas still has a slight tendency to travel in the same rotating spin and orbit as the star. The result is that the gas begins to head indirectly toward the black hole; it's always curving just a bit. This penchant to spin is a property called "angular momentum" and means that the black hole is always receiving a healthy supply of it. The curving causes the hot gas to swirl around the hole, forming a glowing, momentum-rich accretion disk.

For the gas to continue spinning into the black hole, the disk needs to shed existing angular momentum to make room for the incoming momentum. Think of it as a sort of cosmic waterwheel driving matter into a hole. This means that the black hole must receive and shed angular momentum in equal amounts just like a waterwheel fills and empties with water to keep turning.

Friction from bumping and rubbing molecules together is one way the gas dissipates angular momentum. But some astrophysicists wonder if friction is really working alone. Figuring out the answer is the challenge that caught the interest of Miller and fellow astrophysicists John Raymond and Danny Steeghs.

"By understanding what makes material fall onto a black hole, we may also learn how it falls onto other important objects," said Steeghs.

The team suspected that friction has a thieving accomplice: magnetic field winds.

The theory is that coiled magnetic fields corkscrew into the spinning accretion disk and whip up a wind blowing at 300 miles per second. The wind provides angular momentum out-flowing into space. The Chandra team thinks momentum lost to both friction and wind balances out the incoming angular momentum, sending gas into the black hole and lighting up the night. 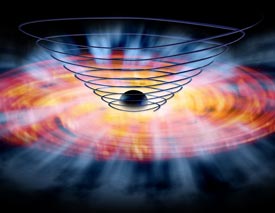 To prove their theory, the scientists used Chandra to compare the characteristics of a peculiar wind coming from a Milky Way black hole with computer models of the hypothetical magnetic field wind. When Miller began receiving the array of data back from Chandra, he and Raymond were excited by the caliber of what they saw.

"The quality of the data was a big surprise," said Miller. "I met with John Raymond and we looked at a large, printed version of the spectrum in a hallway. We spent the afternoon identifying features and soon realized that we had something very special on our hands."

The information streaming back from Chandra showed that wind from the black hole behaves exactly as the computer models predicted. This powerful discovery not only proved the scientists right, but also disproved two competing theories and validated three decades of previous scientific speculation in the process.

"In 1973, theorists came up with the idea that magnetic fields could drive the generation of light by black holes," said Raymond. "Now, over 30 years later, we finally may have proof."

For Miller and his cohorts, proving the magnetic field winds exist is an inspiring early step in understanding how black holes grow. "It is certainly not the endpoint," finalized Miller. "There is much work left to do."