In the unlikely event that you survive a journey to the center of a black hole, what would you see? 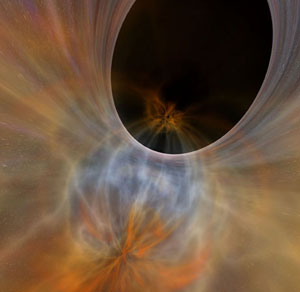 Image right: The trip inside a black hole portrayed in Black Holes: The Other Side of Infinity is created by taking real scientific data about black holes, and translating it into visualizations. It provides audiences a scientifically accurate experience of what it would be like to journey into the heart of a black hole. Credit: Denver Museum of Nature & Science

For one thing, you'd find that the hole isn't black at all. Deep down, black holes are filled with the vibrant light of gas trapped inside. Venturing into the black hole at the center of our galaxy, you'd have a good 20 seconds' worth of viewing time of the radiant wonderland all around you before being vaporized, as you ride on a waterfall of moving space plunging toward the black hole core faster than light itself.

Well, Einstein's math supports such a scenario. And a team of scientists and television producers has turned Einstein’s equations into a new planetarium show called Black Holes: The Other Side of Infinity. The show, which promises to deliver visitors into a black hole and back relatively unscathed, opens February 10 at the Denver Museum of Nature & Science’s Gates Planetarium.

As wild as it all sounds, this virtual voyage, narrated by actor Liam Neeson, is based on computer simulations and real data from galaxy and black hole observations. The program is funded by the National Science Foundation and NASA, produced in association with the PBS science series NOVA, and designed to be taken on the road to planetariums across the country.

"When you come to see the movie, you're not just looking at pretty images. You're looking at Einstein's equations visualized," said Dr. Andrew Hamilton of the University of Colorado at Boulder. Hamilton created the breathtaking computer simulations that enable this first-time journey into a black hole. "This is uncharted territory. You're the captain on the bridge crossing the black hole event horizon, the point of no return."

While scientists and animators often describe the environment outside of a black hole, no one has probed inside until now. The voyage starts, safely enough, in the spiral arms of the Milky Way galaxy. This gorgeous three-dimensional tapestry of stars and ghostly gaseous clouds was created at the National Center for Supercomputing Applications at the University of Illinois, Urbana-Champaign, based on a multitude of ground-based and space-based observations.

"Viewers are treated to ringside views of the stellar nurseries, new and old stars, and stellar-size black holes that fill our galaxy," said Black Holes producer Thomas Lucas, who has created numerous NOVA programs. "The destination of this voyage is the center of our galaxy to a supermassive black hole 26,000 light years away."

A black hole is a region in space so dense and with a gravitational force so fierce that nothing, not even light, can escape its pull if it ventures too closely. The point of no return is called the event horizon.

Scientists say that most galaxies contain a supermassive black hole at their core. These are voids containing the mass of millions to billions of suns constrained to a region no larger than our solar system. Our central black hole is relatively modest, estimated to be about 4 million solar masses.

A spaceship could cross the event horizon without noticing it. But that's when things get funky. According to Einstein's theory of general relativity, space itself pours to the center of the black hole like a waterfall, faster than light. As the black hole spins, gas that has entered gets pinned to the sides by centrifugal force, not unlike a thrill-seeker riding a Tilt-a-Whirl.

This wall of gas forms an inner horizon. Gas falls toward the black hole center, but largely this is lifted back out to the inner horizon. The inner horizon is hot and chaotic, with infalling gas and other gas crawling back out. This is about as far as a voyager can get before being vaporized.

Einstein's equations do permit an escape through a wormhole into another universe. But alas, instabilities prevent any wormhole from forming and instead generate a fierce cauldron of super-hot plasma --- another shot at vaporization.

Lucas and his colleagues seamlessly combine the Milky Way and black hole simulations into a 20-minute show. The research and visualization effort that went into it has been expanded for a NOVA special called Monster of the Milky Way, scheduled to appear on PBS in September 2006.

The Gates production team, working with Spitz, Inc., created a Dome Master of the show, which can be formatted to fit most planetarium configurations, something that has not been possible before. So while Black Holes debuts in Denver, the show will be available worldwide.

The closest black hole is many light years away, far beyond humankind's reach for now. So the planetarium show is your ticket to a black hole today, particularly if vaporization is not your thing.