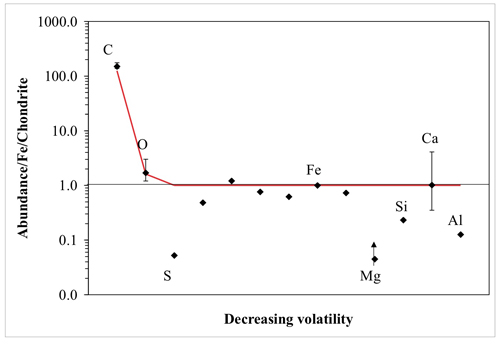 Click on image for high resolution.
Image above: A comparison of the gas composition in Beta Pic with that of chondritic meteorites. If the gas was chondrite-like, all the elements would have abundances of 1. Deviations from 1 imply processes have enriched or depleted the gas in particular elements. Most elements have abundances (relative to Fe) that are remarkably similar to chondritic. Carbon is the obvious exception. The line is a very simplistic model in which an energetic event vaporized chondritic material and then as the vapor cooled most (>99%) of the rock forming elements condensed out to reform dust leaving the carbon in the gas. Despite the nice fit, there are significant problems. Rock forming elements would probably not condense as one, but in a sequence according to their volatility - the least volatile first. So normally one would expect the less volatile elements to be more depleted in the gas than the more volatile ones. Sulfur is much more depleted in the Beta Pic gas than one would predict, and the most refractory elements (e.g. Ca and Al) are not depleted enough. Credit: NASA