The star and its emerging solar system are less than 20 million years old, and planets may have already formed. The abundance of carbon gas in the remaining debris disk indicates that Beta Pictoris' planets could be carbon-rich worlds of graphite and methane, or the star's environs might resemble our own solar system in its early days.

A team led by Aki Roberge of NASA's Goddard Space Flight Center in Greenbelt, Md., presents the observation in the June 8 issue of Nature. The new measurements make Beta Pictoris the first disk of its kind whose gas has been comprehensively studied. The discovery settles a long-standing scientific mystery about how the gas has lingered in this debris disk, yet raises new questions about the development of solar systems.

"There is much, much more carbon gas than anyone expected," said Roberge, a NASA postdoctoral fellow and lead author on the Nature report. "Could this be what our own solar system looked like when it was young? Are we seeing the formation of new types of worlds? Either prospect is fascinating." 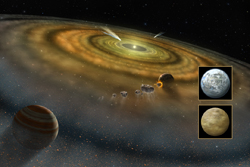 Image left: In the Beta Pictoris Disk. Artist's conception of the dust and gas disk surrounding the star Beta Pictoris. A giant planet may have already formed and terrestrial planets may be forming. The inset panels show two possible outcomes for mature terrestrial planets around Beta Pic. The top one is a water-rich planet similar to the Earth; the bottom one is a carbon-rich planet, with a smoggy, methane-rich atmosphere similar to that of Titan, a moon of Saturn. + High resolution. Credit: NASA/FUSE/Lynette Cook

Beta Pictoris, about 60 light years away from Earth, is 1.8 times more massive than our sun. At eight to 20 million years old, it is very young. This young star's disk was discovered in 1984. Earlier observations with the Hubble Space Telescope and the Keck telescope hinted that a Jupiter-like planet may have already formed in this disk, and rocky terrestrial planets may be forming. Such planets would be too small and faint to observe with current instruments. The terrestrial planets in our solar system -- Mercury, Venus, Earth and Mars -- formed from the collision of smaller planetary bodies such as asteroids about five billion years ago. During the few hundred million years after Earth was formed, asteroids and comets might have smashed into our planet to deliver virtually all of the water and organic material we see today. These materials are the building blocks of life on Earth.

Asteroids and comets orbiting Beta Pictoris might contain large amounts of carbon-rich material, such as graphite and methane. Planets forming from or impacted by such bodies would be very different from those in our solar system and might have methane-rich atmospheres, like Titan, a moon of Saturn.

"What we have learned in the past ten years is that our galaxy is filled with other solar systems, and each one is different from the next," said Marc Kuchner of NASA Goddard, an expert on extra-solar planets. "Beta Pictoris may be telling us something about the variety of planets that might be out there; some might be carbon planets, very different from the Earth."

Alternatively, Beta Pictoris might be similar to how our solar system was long ago. While local asteroids and comets don't seem carbon-rich today, some research suggests that certain meteorites called enstatite chondrite meteorites formed in a carbon-rich environment. Some scientists also speculate that Jupiter has a carbon core. 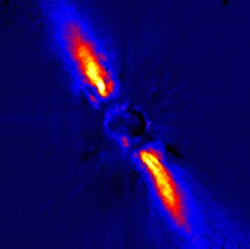 "We might be observing processes that occurred early in our solar system's development," said Nature co-author Alycia Weinberger of the Carnegie Institution of Washington.

Other co-authors on the report are Paul Feldman, Johns Hopkins University, Baltimore, and Magali Deleuil and Jean-Claude Bouret, Laboratoire d'Astrophysique de Marseille in France. The FUSE project is a NASA Explorer mission, developed in cooperation with France's Centre National d'Etudes Spatiales and the Canadian Space Agency by Johns Hopkins University in Baltimore; University of Colorado, Boulder; and University of California, Berkeley. Goddard manages the program for NASA's Science Mission Directorate.