Building a Better Guide to the Galaxy 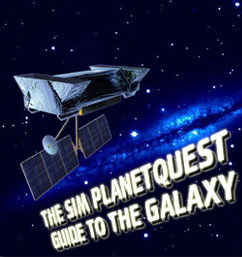 "Space is big. Really big. You just won't believe how vastly hugely mind-bogglingly big it is."

-- Douglas Adams, "The Hitchhiker's Guide to the Galaxy"

It is the job of astronomers to put numbers on the stupefying vastness of space and the objects it holds. That's how they get the universe to spill its secrets.

The University of Virginia's Steve Majewski and his team plan to use NASA's SIM PlanetQuest space telescope to make ultra-precise measurements that will reveal more about the nature of our galaxy than ever before possible, laying the foundation for a real-life guide to the galaxy.

For now, astronomers know less about the shape and mass of the Milky Way than of many other galaxies. That's because discerning this information is like trying to see a marching band's formation when you're with them on the football field. "We're in the grandstand, looking down on Andromeda and the other galaxies," Majewski said, "whereas in our own galaxy, we're in the marching band."

With SIM PlanetQuest, scheduled to launch within the next decade, Majewski and his team plan to determine the Milky Way's size and shape, the amount and distribution of its mass, and the motions of its stars. En route, they will describe some fascinating tourist attractions, including ...

Despite the assertions of the Hitchhiker's Guide, astronomers know of no Restaurant at the End of the Universe. However, there is a very nice Bar at the Center of the Galaxy. 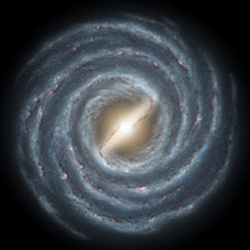 This is not the sort of place where residents of distant solar systems go for Happy Hour (as far as we know). It is instead an odd sort of wave pattern that pulls and pushes large groups of stars into the shape of a candy bar. The wave pattern spins like a propeller about the galactic center, continually adding new stars into its pattern and leaving old ones behind.

Left: Artist's concept of the Milky Way galaxy, with the "galactic bar" visible in the center. (Image by R. Hurt)

Central bars seem to be pretty common, and may help to shovel stars and gas clouds into the supermassive black holes thought to lurk at the core of most galaxies, including our own. By measuring the proper motion (that is, the side-to-side motion as seen from Earth) of about 10,000 stars in the galaxy's central bulge, Majewski's team means to determine the Milky Way bar's shape, mass, rotational speed and history.

The team will also study the dynamics of the disk and halo, measuring how quickly their stars obit the galactic center, how those speeds vary with distance from the center, and how the stars (including our sun) wander about as they orbit, in response to local gravitational influences. This information will help to answer one of the biggest and most puzzling questions astronomers have about the Milky Way: where is the 90 percent of the galaxy that we can't see? 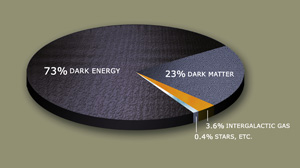 If you're the type of traveler who enjoys little-seen places, you're in luck. The vast majority of our galaxy is invisible, at least to existing instruments. How do we know it's there?

Right: Estimated distribution of dark matter and dark energy in the universe.

Because our galaxy, like many others that astronomers have observed, appears to be spinning much too quickly. The rapid rotation should be tearing it apart unless it is held together by a lot more gravity than can be explained by the stars, gas and dust we can see. More gravity means more mass.

Scientists call this unseen mass "dark matter." The Majewski team plans to sniff it out by observing its gravitational effect on stars within the Milky Way disk and on groups of stars that orbit the disk.

In doing so, they hope also to solve the Missing Satellite Problem. Current models insist that our galaxy should have as many as a thousand dwarf galaxies buzzing around it, each with from 0.01 percent to 10 percent as much mass as the Milky Way. But astronomers can see only a dozen satellite galaxies plus about 150 globular clusters, which are much-smaller collections of stars. As Majewski put it, "They're the sprinkles on the cake."

One hypothesis is that the "missing" satellites are composed entirely of dark matter.

Majewski's team will determine proper motions for most or all of the visible satellites within a million light years of the galactic center (more than 30 times the distance of our solar system from the center), a feat of precision that can be performed only with the SIM PlanetQuest telescope. This will reveal not only the total amount of mass out to various radii, but also where dark matter is concentrated. And learning where the dark matter is will provide clues to what it is. For example, some hypothetical dark matter candidates would form clumps, while others would be distributed more smoothly.

Especially revealing will be observations of the "tidal tails" that our galaxy's gravity appears to have been stripping away from the satellites. These are streams of stars drawn out of their parent galaxies and clusters like pulled taffy, marking the trails of those disintegrating satellites as they orbit the Milky Way. Some tails are so long, they encircle the galaxy. 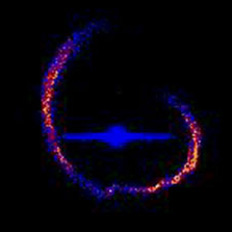 Majewski's team will measure the position and motion of these stream stars very precisely -- again, a unique capability of SIM PlanetQuest. They will plug the findings into computer models, along with various estimates of our galaxy's mass, and run the models backwards. The model with the correct mass distribution will pull all of the stream stars back into their original satellite systems (see animation). It will be like filming a dish shattering, and then running the movie backward to watch the pieces reassemble.

Left: Computer model showing 'tidal tails' of stars being pulled off a satellite galaxy by the Milky Way's gravity.

"It seems that almost every halo star is part of one stream or another," Majewski said. "And that suggests that the Milky Way halo actually was formed by accretion, by cannibalization of satellites.

"The Milky Way is lapping up these spaghetti strands from satellites. I call it the Galactic Gourmand."

Maybe there is a Restaurant at the End of the Universe after all.


Written by Bob Silberg/PlanetQuest
› Back To Top