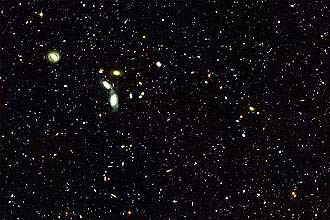 In one of its most memorable observations, NASA's Hubble Space Telescope gazed into a "keyhole" piece of sky and didn't blink for 10 days. The telescope's unwavering "eyes" uncovered a galactic gold mine: a bewildering assortment of galaxies stretching back billions of years. Astronomers dubbed the area the Hubble Deep Field.

How could Hubble top the landmark Hubble Deep Field observations? How about by viewing a piece of the sky equal to 60 Hubble Deep Fields? The telescope's powerful Advanced Camera for Surveys did just that, sampling galaxies in an area over one-third the size of the full moon. The galactic census is called the Great Observatories Origins Deep Survey (GOODS), the most ambitious study of the early universe yet undertaken with the Hubble telescope.

Hubble is one of three "great observatories" involved in this survey. The other two are the Chandra X-ray Observatory and the Space Telescope Infrared Facility (SIRTF), which will be launched in August 2003. Astronomers are using Chandra to search the GOODS fields for the earliest black holes in the universe. SIRTF will hunt for more stars.

The GOODS survey targeted two seemingly empty spots in the sky -- one in the northern sky, the other in the southern sky. But Hubble proved that these small scraps of sky are teeming with galactic life. The telescope discovered roughly 50,000 galaxies in both regions combined. Astronomers have identified more than 2,000 of them as infant galaxies, observed when the cosmos was less than about 2 billion years old. With these Hubble snapshots, astronomers are creating a scrapbook of galaxy evolution from infancy to adulthood.

The myriad galaxies in the Hubble Deep Field represented the first big step for Hubble astronomers to understand galaxy evolution. But studying galaxy evolution in the Hubble Deep Field is like trying to understand the population of a country by sampling a small village. Astronomers don't know if the galaxies in that village are representative of the universe's galactic population. The GOODS survey, on the other hand, is akin to sampling the population of a large city to make inferences about galaxies in the cosmos.

The growth of black holes in galaxies is part of the galaxy evolution scrapbook. For the GOODS survey, astronomers used the X-ray "eyes" of Chandra to hunt for these mysterious objects. One of the fascinating findings in this "deepest" X-ray image ever taken is the discovery of seven mysterious black holes that do not correspond to the galaxies seen in the Hubble image. Astronomers suspect that these objects are the most distant black holes ever detected. An alternative theory is that the galaxies in which they reside cannot be seen because they are heavily enshrouded in dust.

When comparing the Hubble and Chandra fields, astronomers also found that active black holes in distant, relatively small galaxies were more rare than expected. This may be due to the effects of early generations of massive stars that exploded as supernovas, evacuating galactic gas and thus reducing the supply of gas needed to feed a supermassive black hole.